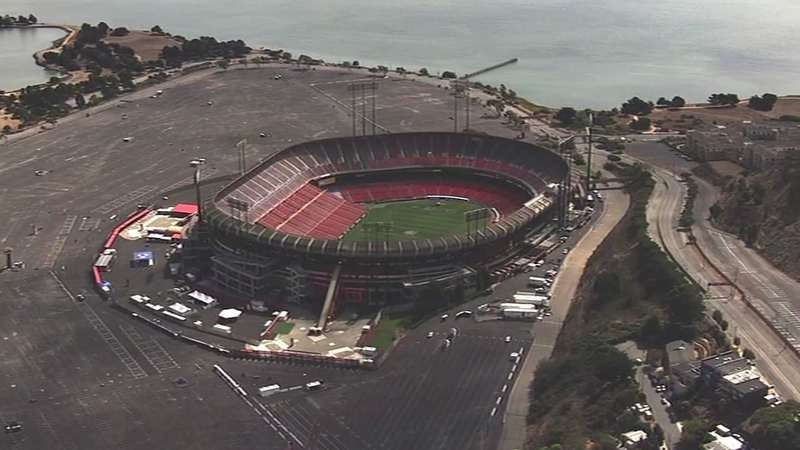 SAN FRANCISCO (KGO) -- The dilemma about how to best get rid of Candlestick Park is heating up in the Bayview. The city of San Francisco is looking at whether to allow the developer to tear it down piece by piece or to implode the thing in one big blast. ABC7 News spoke to residents who believe there is really only one good option.

Candlestick Park will either be taken down mechanically piece by piece or with explosives, the same way the Kingdome in Seattle was destroyed 15 years ago. Implosion is said to be a much faster and cheaper option. The take down only takes a day versus a couple months.

At a community meeting held Monday night, Bayview residents spoke out. An overwhelming majority voiced opposition to an implosion so close to their homes. They worry about the health effects from all the dust.

Dozens of Bayview residents attended a community meeting and held their hands up in support of the developer taking down Candlestick piece by piece. (Jan. 5, 2015/ABC7 News)

Dozens of Bayview residents attended a community meeting and held their hands up in support of the developer taking down Candlestick piece by piece. (Jan. 5, 2015/ABC7 News)

"We're talking about silica dust which is essentially the concrete, the concrete dust, which we know will raise rates of asthma, of heart disease, of cancer," Julia Barber of the Bayview Hill Neighborhood Association said.

A representative with Lennar, the developer that is asking for the implosion permit, says the process is safe. The open space surrounding the stadium as well as the west to east winds make it a good candidate.

"The conventional demolition, or the implosion option, do not lead to any risk to health, otherwise we would not pursue them," B.H. Bronson Johnson from Lennar Urban said.

But residents aren't buying it.

"I think it's a black lives matter situation. I think that environmental justice is something they don't consider in poor black neighborhoods," Bayview resident Marlee-I Hand said.