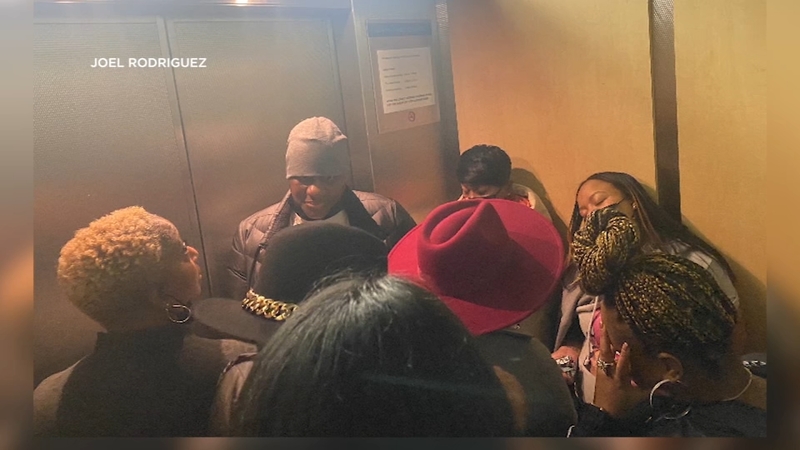 Concertgoers stuck on another SF elevator overdue for inspection

SAN FRANCISCO (KGO) -- It took requests by Hotel Zeppelin in 2021 and 2022 as well as calls from ABC7 News for the Department of Industrial Relations to dispatch someone to inspect the elevator Gardenia Zuniga recently got stuck on for an hour.

"I am stuck on the 7th floor, I've called for help, I've already screamed," Zuniga said in a cell phone video she took at the time.

Prior to her getting stuck, the elevator was last inspected in June of 2019.

After ABC7 News uncovered a backlog of elevator state safety inspections across San Francisco, the Department of Industrial Relations now tells the I-Team that the inspector dispatched to Hotel Zeppelin found four issues with the elevator which warranted its removal from service.

The elevator was red-tagged until corrections could be made.

"Shame on you because this could be prevented," said Zuniga in a follow-up interview with ABC7 News Friday.

The Department of Industrial Relations says an elevator repair company corrected the issues while the state safety inspector was still on site inspecting other elevators.

DIR has said Cal/OSHA acknowledges the need for more elevator inspectors and that hiring is a top priority for the division.

Joel Rodriguez and his girlfriend were in a group of nearly 10 people who got stuck on an elevator at the Masonic on California Street after a concert in February of this year.

"We're all stuck in here after this concert with this old (expletive) permit," Rodriguez said in a cell phone video he took.

RELATED: Groom late to wedding after getting stuck in elevator, asks hotel for compensation

According to a permit that was inside the elevator at the time, it had last been inspected in March of 2016.

"There was a pregnant lady that was on the elevator with us. Myself and my girlfriend suffer from anxiety," said Rodriguez.

It turns out the elevator has been inspected more recently. A spokesperson for the Masonic provided ABC7 News with a permit for the same elevator which says it was last inspected in February of 2020.

The elevator is overdue for a state safety inspection by more than a year.

DIR sent the Masonic a letter in February, three days after Rodriguez got stuck, which says the expired permit remains valid until an elevator inspector can be dispatched.

A Nebraska man recorded the nightmare-come-true moment of getting stuck in an elevator with rising neck-high floodwaters.

DIR has told ABC7 News, "Elevators are required to be properly serviced and maintained by the building owner and their certified elevator maintenance company, even when operating with expired permits."

But Rodriguez says when he used the emergency call button, the call was routed to a maintenance company in Ohio.

"They were basically reaching out to a local tech that was in the area on a Sunday night at 10:45 p.m. you know which seemed fairly impossible," said Rodriguez.

San Francisco firefighters rescued the group of stuck concertgoers about an hour later.

"Seeing those doors open it felt like we were never going to get out of there so it was definitely a huge, huge sigh of relief for us," said Rodriguez.

When it comes to elevator inspections, Rodriguez wants more oversight by the state.

"Who is holding people accountable," he said.