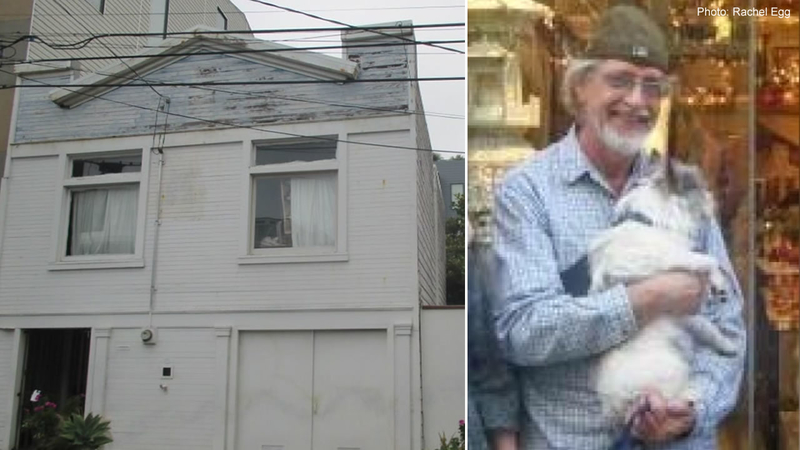 SAN FRANCISCO (KGO) -- Police in San Francisco are investigating after a headless body was found in a fish tank earlier this month.

The body was found in a fish tank at the home on Clara Street near 5th in the SOMA neighborhood.

Scot Free has been friends with the resident of the home, Brian Egg, for almost three decades.

"He was someone I would see almost on a daily basis outside."

In June, he thought something was wrong. Sixty-five-year old Egg had disappeared.

"Unfortunately, he had a few not-so-good friends from the streets that would come in and I guess stay with him," Free said.

"On both occasions, officer responded to the residence but received no response at the door and saw no suspicious circumstances," San Francisco police Commander Greg McEachern said in a briefing to reporters.

The voice mail on Egg's home phone said he was away and would be back on August 12.

The date came and went with no sign of Egg.

Brian Egg missing from his SoMo home and believed to have been murdered. ..no one charged with homicide but police have “persons of interest.” pic.twitter.com/g86jdS2wkn

It was suspicious because Egg never had an answering machine. And, the voice on it was not his.

Neighbors say they saw strangers in the home.

In mid-August there was a big break. A big white crime scene cleaning crew arrived," said Free. Neighbors called police again. This time, they detained a person in the house.

Police got a search warrant and found a body in a large fish tank inside a room near the stairway. A body without a head or hands.

Free believes the stranger in the home hid evidence.

"He had been doing a lot of cleaning up on his own," said Free.

He points to a notice on the door from the water department saying there was increased water use and to check for leaks.

Police arrested 52 year old Robert Mccaffrey who was at the home when the crime scene cleaners came.

Also taken into custody was 39 year old Lane Silva, who was arrested at a South of Market hotel the next day.

Both were initially charged with ID theft, financial crimes and homicide.

But the DA's office decided to discharge them, saying prosecutors needed more time to investigate the homicide.

Silva was held at the Alameda County Jail for probation violation.

Egg remains missing, and police are trying to identify the body.

Police said during a press conference Tuesday that the body was found on the second day of searching the residence.