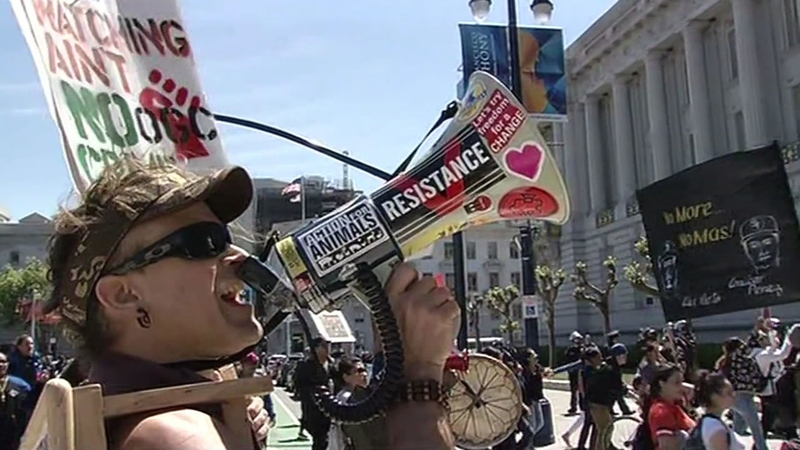 The protesters were reported by several callers to be blocking traffic on the eastbound lanes of the bridge at about 4 p.m., CHP Officer Vu Williams said.

CHP officers responded and immediately took the six protesters into custody. Williams said it appears they entered on the Fourth Street off-ramp from the highway. 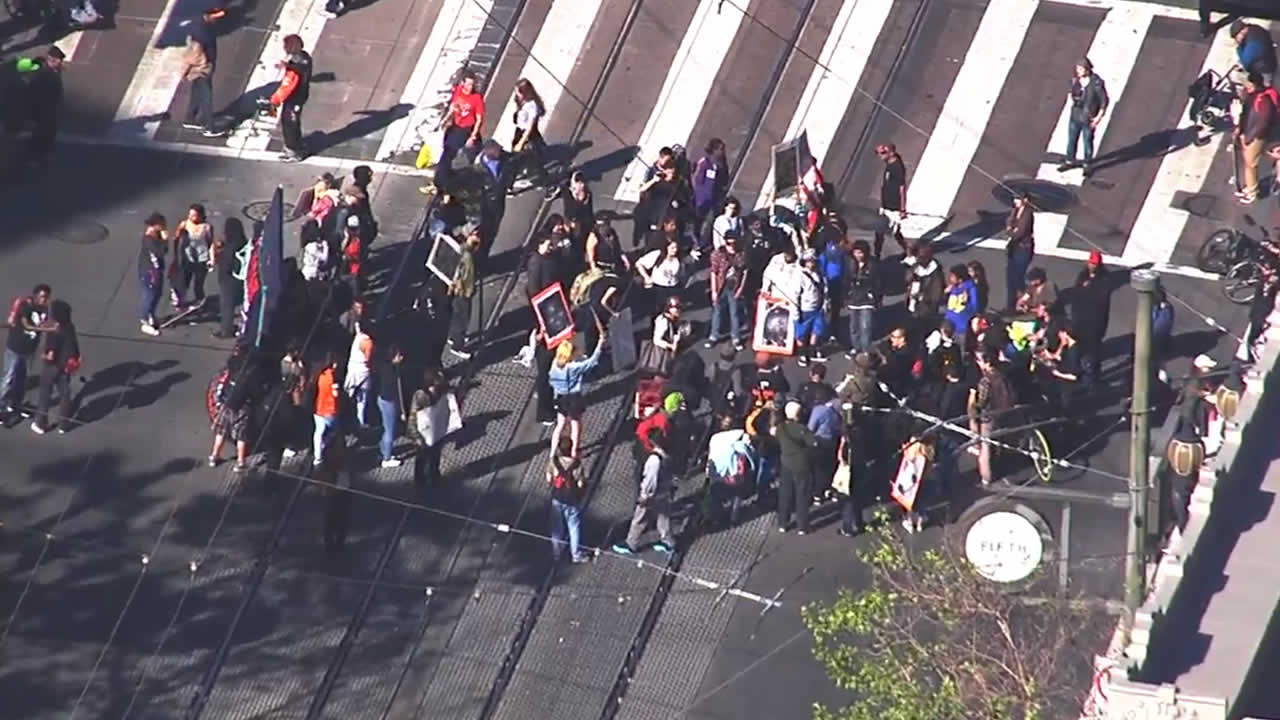 He did not know if there were previously other protesters on the bridge, but said when officers arrived there were only six.

The protesters were arrested and eventually booked into county jail in San Francisco, Williams said.

Earlier in the day, a couple hundred people gathered outside San Francisco City Hall to demand that the city promote racial equality and then briefly interrupted the city's Board of Supervisors meeting this afternoon with protest chants.

Protesters gathered at noon with San Francisco Supervisors John Avalos and David Campos as well as numerous community leaders to highlight solutions to the growing economic gap in the city. 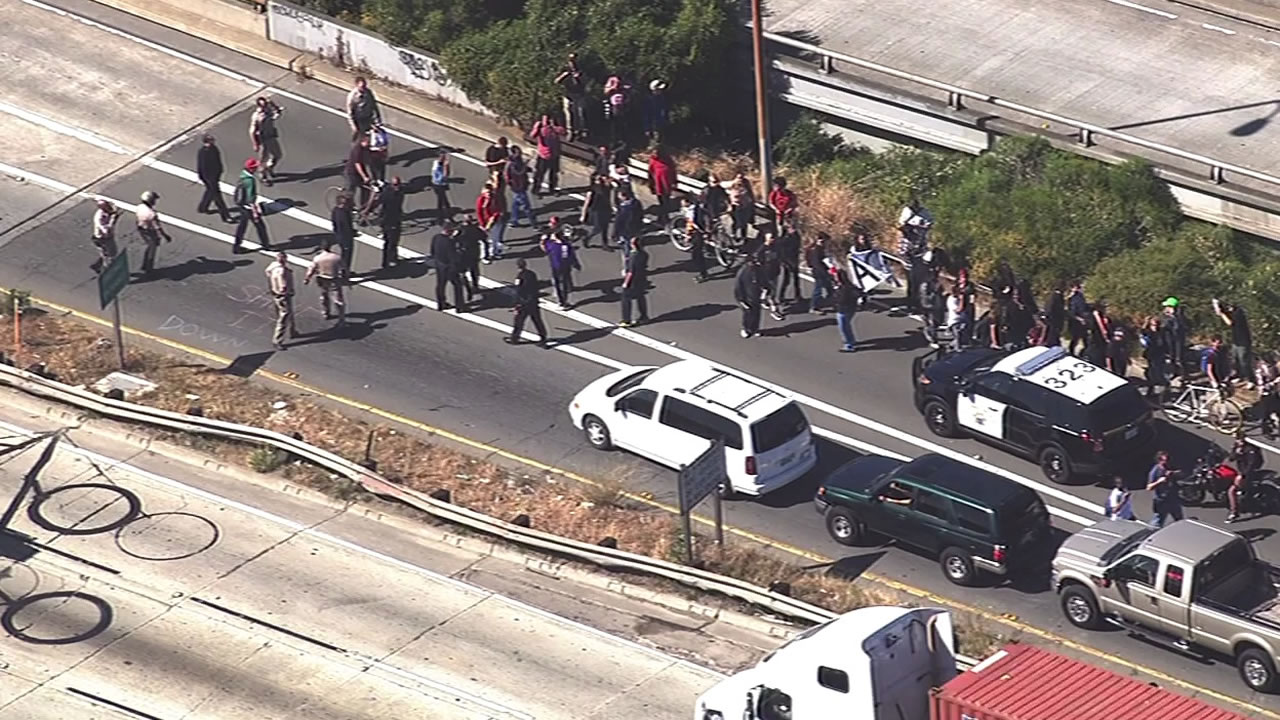 Protesters chanted "Mayor Lee can't you see, inequality is killing me," held signs that read "Black And Brown Lives Matter" and listed the names of dozens of black individuals who were killed by police so far in 2015.

Many protesters said they were disappointed with how the city has handled racist and homophobic text messages sent between San Francisco police officers.

They maintained that officers under investigation for involvement in such activities should be placed on unpaid, not paid, administrative leave and supported independent investigations into the matter.

Avalos aired his frustration with what he said is growing inequality and racial profiling in America and what he called "the lip service" paid to the cause.

He said the city is dealing with racial profiling and racial discrimination.

Avalos said that black individuals in the Bayview District are under constant surveillance and racially profiled, but said if you're white and "If you're out there partying in Dolores Park, nothing happens."

Supervisor Campos said the city has the fastest growing inequality of any city in the country and that if San Francisco were a country, it "would be up there with Rwanda," in terms of inequality.

"We have had enough," Campos said today.

Protesters then briefly shut down the supervisors' 2 p.m. weekly meeting, chanting "no justice, no peace, no racist police."

Shortly after the meeting was set to begin, Breed announced that the Board of Supervisors meeting was adjourned until further notice.

Some protesters said they were appalled that Breed left the chambers after declaring the meeting adjourned instead of listening to their concerns.

Amos Brown, San Francisco branch president of the National Association for the Advancement of Colored People, was in the crowd this afternoon and said, "I know that business as usual has been interrupted, but there comes a time when we the oppressed must rise up."

He said the racist cops need to be fired and encouraged the dozens of people in attendance today to go to the San Francisco Police Commission's meeting at 5 p.m. Wednesday at City Hall.

Protesters then went into the atrium of City Hall and continued protesting despite a heavy presence of sheriff's deputies wearing riot gear. The Board of Supervisors meeting later resumed around 2:45 p.m.

The protesters were among the hundreds of protesters who participated in numerous actions throughout the Bay Area against recent police shooting deaths, including actions that disrupted the San Francisco Board of Supervisors meeting, occupied the Oakland City Council chambers and briefly blocked an Interstate Highway 880 on-ramp in Oakland.

The actions in Oakland, Berkeley, San Jose and San Francisco were part of a nationwide day of action, with protests in more than 30 cities in 18 states.Demonstrations were underway across the Bay Area and the nation Tuesday to protest police killings, according to organizers.