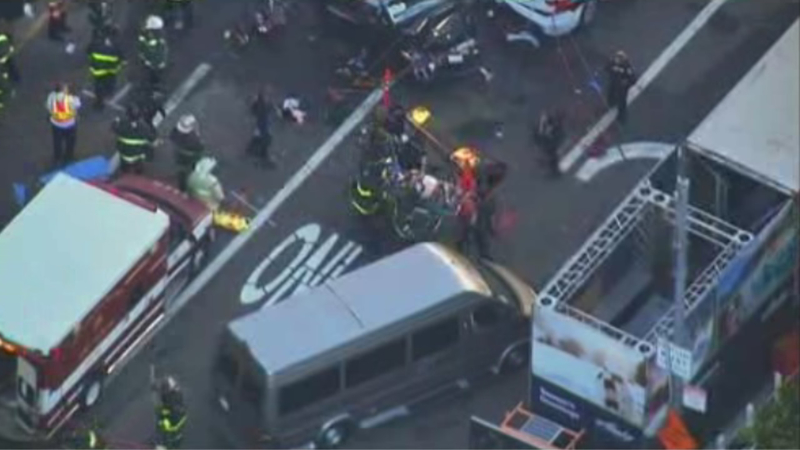 SAN FRANCISCO (KGO) -- Twenty people were injured, including four critically and two seriously, after a tour bus collided with several vehicles at a construction site in downtown San Francisco. The crash happened Friday afternoon at Post and Stockton streets where a new Apple store is being built.

The wife of the driver tells ABC7 News that problems with the brakes may be the cause of the crash, although investigators have not issued an official statement to support that claim.

Officials say all four of those with critical injuries and the two with serious injuries are being treated at San Francisco General Hospital.

One of the victims has been released. Of the remaining victims, four are in critical condition. One of those victims is a woman and the other three are men.

The other two victims are both male and in serious condition.

The hospital says the injuries facial and head injuries, fractured ribs, arms and legs and damage to internal organs.

The other 14 victims were taken to other hospitals. Two were treated at Kaiser and released.

Saint Francis treated three patients from the accident. One was discharged, one was transferred and one remains in the hospital in stable condition.

According to officials, the driver of that open-air double-decker bus was driving erratically and speeding for at least two blocks before ending at the site.

Police say he hit a bicyclist, who is in critical condition, before hitting several vehicles and scaffolding which then fell on more cars and people. That scaffolding is part of construction at the site of the new Apple store.

"According to eyewitnesses, they saw the bus, which is double-decker open-air bus, driving erratically down Post Street," said San Francisco Fire Department spokesperson Mindy Talmadge. "In the process, a few vehicles were struck then the bus came to rest against some scaffolding which fell into the street."