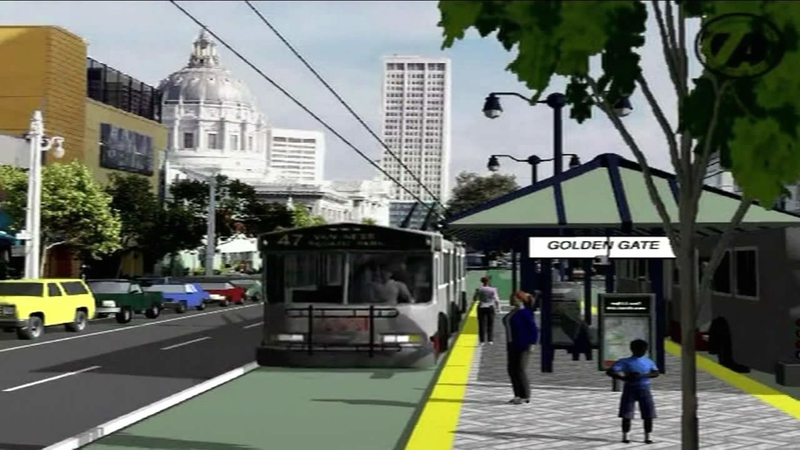 SAN FRANCISCO (KGO) -- A plan to make the trip down San Francisco's Van Ness Avenue faster for Muni buses is moving forward. But already, it's creating concern over backup and lost parking spaces from many who work and play along the city's best known avenue. Changes from the Bus Rapid Transit Project will happen pretty much along the whole thoroughfare, from Mission to Lombard streets for the BRT lanes.

This is all in keeping with the city's official policy of being a transit first city. It's not a new idea, but it is a $125 million project that will reshape virtually all of Van Ness Avenue.

The Bus Rapid Transit System or BRT will give Muni and Golden Gate Transit buses one dedicated lane in both directions right down the middle of the street.

That means instead of the current three lanes for cars, there will be two. And more than 100 parking spaces will be lost. Some businesses, like the Diamond Club Tattoo Parlor on Van Ness, think that will be a disaster.

"There are more cars registered in San Francisco than there are parking spaces already," said Matthew Verseput with Diamond Club Tattoo. "And I think it's just going to be more of a hassle than it is going to be a convenience for anybody."

BRT is designed to improve reliability and speed up service for the 16,000 Muni passengers on that corridor every day.

"These are changes that will allow us to operate transit very much like we do the metro system," said SFMTA spokesperson Paul Rose.

"I'm excited to see that San Francisco is stepping up their game with regard to transportation," she said. "I think it's needed."

Once the dedicated bus lanes are in, there will be no more left turns on Van Ness. This means cars making a right will run into the next street - Polk.

Alan Zafrin, owner of Johnson Leathers, worries about that impact.

"We're a small business," he said. "We need parking for customers. And they're already frustrated with the lack of parking."