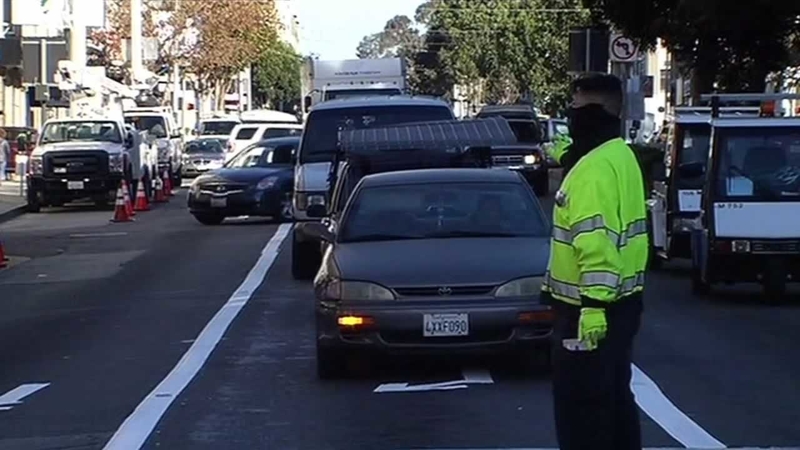 SAN FRANCISCO (KGO) -- This weekend is the last full closure of Van Ness Avenue for construction of an underground pedestrian tunnel.

It will be the first pedestrian tunnel under Van Ness in San Francisco history.

The stretch that's closed between Post and Geary is all tied to California Pacific Medical Center's future hospital.

Don't forget - Van Ness in San Francisco between Post & Geary is shut down this weekend! pic.twitter.com/eHKjmaKgrT

Businesses are expecting a big impact.

The owner of the Fingertip Nail Salon on Sutter St. opened her shop on Friday but no customers were there. It could be because of the major back up on Van Ness because of a portion of the thoroughfare that is shut down.

Chiropractor Daniel Latch is also expecting a rough day. "Last time we had a couple people coming from East Bay and they got stuck in so much traffic they had to turn around or had to wait very late. I was here 'til 7 waiting," he said.

An animation shows what crews are building - a pedestrian tunnel between the future medical center and its office building.

The section between Post and Geary will be closed all weekend.

They started the shutdown at midnight Friday, really throwing a kink into the morning commute.

It was enough to stop some residents dead in their tracks.

"We were wondering the trucks on the left side over here, how are they going to get them over to the right and not have the traffic all backed up? So we said we will stop and watch it unfold," San Francisco resident Denise Perrier said.

Drivers looked and sounded quite exasperated Friday morning. The chiropractor says those patients are the ones that sometimes need a little extra attention.

"Sometimes we need to relax their muscles a little bit or they'll schedule a massage with us, too," Latch said.