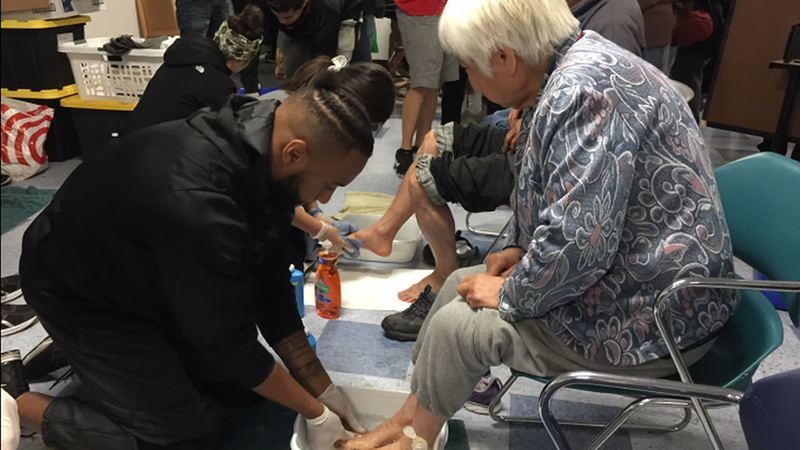 SAN JOSE, Calif. (KGO) -- An estimated 300 volunteers spent three or more hours at CityTeam in San Jose, a 60-year-old institution that operates shelters for the homeless on Thanksgiving Day.

However, most are not cooking or serving the turkey dinners you'd expect on Thanksgiving. The majority are helping to wash feet, to fit clients with shoes and to cut their hair. It's all about dignity.

The Charles Street shelter was buzzing Thursday morning as a wide range of men women and children arrived, including Larry Nordby, who was beaming as he sat in a chair, trying on a new pair of sneakers.

His old shoes were tattered; the replacements donated but in far better condition to give him firm footing in his part-time work at a delivery service.

CityTeam spent three months collecting donated shoes for distribution on Thanksgiving. There was even a selection of children's shoes available.

Along a back wall, professional barbers were busy with shears and clippers, tending to the hair of women and men anxious to spruce up their appearance, never knowing when an opportunity for a job interview might emerge.

Of course, turkey with all the side dishes are still a central part of the mission this Thanksgiving Day.

Some of his recipes are family secrets, so he personally presides over the volunteers cooking the stuffing, gravy, vegetables and other menu items.

A rotating shift of 25 at a time will plate the food while other volunteers will serve the plates to eager guests, restaurant-style. There's no waiting in line, part of the philosophy of treating the homeless with respect.

CityTeam's roots are in San Jose where it operates separate shelters for men, women, pregnant women and one for women with children. Its clients range from "Yale to jail," as they say.

The Thanksgiving meal service has been an annual tradition dating back at least 10 years.

Once Thanksgving is over, the staff and volunteers at CityTeam will be gearing up to do it all over again for Christmas and for Easter.