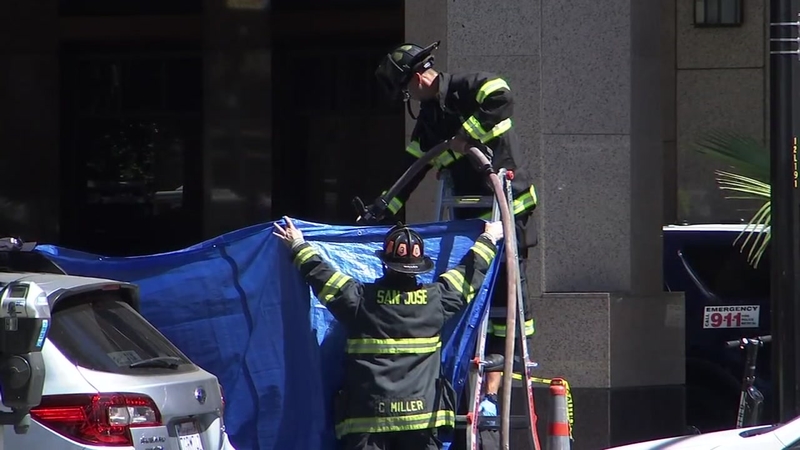 Hazmat units were sent to clear out the 19th floor due to toxic chemicals used in apparent death by suicide.

San Jose police later confirmed the death by suicide in an email to ABC7 News.

Captain Matlow described the victim only as an adult female. He says the chemicals were found in her room.

"We determined that there were chemicals in the room, what those chemicals are or how many there were, I don't know," says Matlow, adding that, "The hazard was contained to that one room."

He says some guest may still notice an unusual odor, but stresses that the air inside the hotel and the surrounding area is not toxic.

"The only issue is a bad odor, that is not dangerous, and the hotel is working very diligently to get rid of the odor by putting fresh air into the building," he says.

In an email to ABC7 News, the Fairmont San Jose says the "security and safety" of its guests and staff are its top priority.

"We continue to work closely with local EMS and our own safety officials to ensure the safety and security of both our guests and employees. The hotel's security includes extensive internal protocols and a wide range of measures in place to safeguard our building and to protect our guests and colleagues."

A total of seven staff members and two hotel guests had to be decontaminated and were taken to local hospitals with non-life threatening injuries.

Captain Matlow says 120 people were evacuated from the hotel. The roads around the hotel were closed for several hours. In all, 100 first responders and law enforcement officials were called to the scene.

Some guests, who are staying at the hotel or attending one of the several big events taking place at the hotel Saturday evening, say there is an uneasiness in attending a function where a woman died earlier in the day.

San Jose resident Arthur Arreola, who came out for a party at the hotel, says, he feels bad for the woman who died, but wanted to attend his function.

"It's sad, we pay our respects. Today, also in Texas, there was a shooting, (but) life goes on," says Arreola.