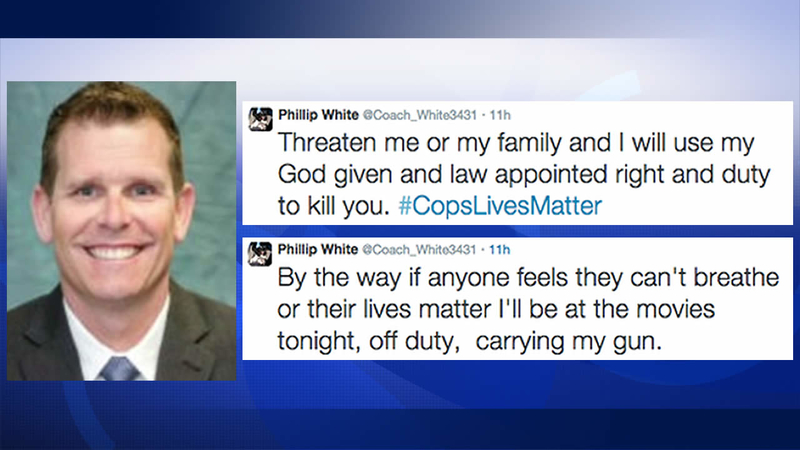 SAN JOSE, Calif. (KGO) -- A San Jose police officer is now on leave after controversial tweets about protests in the Bay Area. Officer Phillip White's tweets were aimed at people protesting deadly police brutality, and his messages have created a firestorm of condemnation.

The posts on White's account can no longer be accessed by the public. But they were already captured by others including the website Buzzfeed, which displayed other posts the officer had made previously about the ongoing demonstrations. Since his tweets were revealed, there's been a lot of criticism and repercussions. White was not only a police officer, he was also an assistant basketball coach at Menlo College. The school fired him on Monday, but that's the least of his troubles.

White's tweets read: "Threaten me or my family and I will use my God given and law appointed right and duty to kill you. #CopsLivesMatter."

And another reads: "By the way if anyone feels they can't breathe or their lives matter, I'll be at the movies tonight, off duty, carrying my gun."

The reaction was quick and predictable.

"I think he needs to lose his job," said Rev. Jethroe Moore.

He was with other leaders of San Jose's civil rights groups at their regular meeting. Everyone there had read the tweets.

"The fear is that he tweeted this to maybe some other friends," Moore said. "So are there other officers in this department that are part of the tweets?"

"Disrespectful, offensive, and inappropriate comments on social media have no place in the public discourse involving the tragic loss of lives in officer-involved incidents around the country," said James Gonzales with the San Jose Police Officers Association." We condemn these comments."

On Monday morning, someone filed a complaint with Judge Ladoris Cordell, San Jose's independent police auditor. That triggers a police internal affairs probe, which will look into whether White's tweets violated a chief's order, which warns officers from posting on social media anything that would reflect adversely against the department. White may have also violated the duty manual's policy on conduct unbecoming an officer.

"Basically the rule says officers are not to engage in that kind of conduct either on duty or off duty," Cordell said.