SJPD chief fires back at critics, says officers 'endured an onslaught of violence' 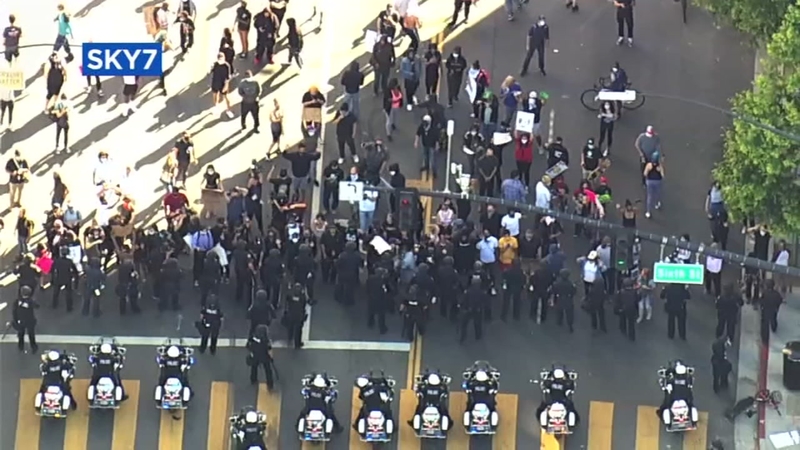 "We've seen too many episodes in which people have exploited the cover of peaceful protests to commit violent acts and destroy the city in various ways," said Mayor Liccardo.

Chief Garcia mounted a spirited defense of his officers' response to what he called "an insurrection of pre-planned violence" and "the likes of which I have not seen in my time wearing this uniform."

"Your officers endured an onslaught of violence directed at them in an unprecedented attempt by some to destroy parts of this city that no San Jose officer has seen before," said Garcia.

He went on to say a "blanket of chaos" poured over the city over the past several days and officers "absorbed the collective rage." Another officer described the scene as a "war zone" and painted the police response as a battle to "save the city."

The police department played a compilation of video clips at the press conference showing incidents of violence and property damage. He listed a detailed timeline of each protest, making a case that the officers have been under attack. He said on Friday alone, officers were hit with rocks, frozen water bottles, pieces of wood, chunks of asphalt and metal rebar.

Two civilians were also injured in a hit and run by an SUV. The driver was later arrested.

A "code 30" was called Friday, meaning all officer units were required to respond to the emergency.

In the days that followed, Garcia said officers were hit by someone shooting a potato gun and throwing bottles of urine, to name a few.

"When you're part of a large crowd, your awareness can be very narrow. If an agitator throws a crowbar ... which happened to an officer 20 feet away from a peaceful protester ... they may not be aware of that," said Garcia. "Our officers are responding to that."

"I don't think there's any sort of way you could characterize the actions of the police department as appropriate by any stretch of the imagination, and I think there has to be some real accountability over the violence of the officers," said Raj Jayadev, Silicon Valley De-Bug, a local social justice organization.

Garcia apologized earlier this week for his initial reaction to video of one of his officers, Jared Yuen, taunting protesters. Yuen is also accused of shooting a protester with a rubber bullet at that same protest.

"I'm not happy with his actions, I'm sure if Jared was sitting here he'd be embarrassed as well. But I will tell you, I know Jared and he's a good kid who made a mistake who let his emotions get the better of him," Chief Garcia said Sunday.

On Tuesday, he told ABC7 News' Kate Larsen, "I should not have said that he's a good kid. Now I know the officer personally, and he's worked very hard for this department... at the end of the day, the actions were unprofessional, they're not going to be tolerated, they're going to be investigated. The officer will be held accountable for his actions."

On Thursday, he added the incident "tarnished" the actions of other officers.

"I'm enormously proud at the collective bravery shown at this department tasked with an almost impossible task," Garcia said.

San Jose was the first city in the Bay Area to see a major protest in response to the death of George Floyd. At one point, the protest went onto Highway 101 Friday afternoon.

San Jose has lifted its curfew as of Thursday morning.

"Police departments alone will not be able to right all the collective wrongs being expressed on our streets, but we must acknowledge our responsibility to effect change and the urgency in which we must do so," Garcia added.

Take a look at the latest stories and videos about the investigation into George Floyd's death in Minneapolis and protests across the U.S.
RELATED STORIES & VIDEOS: