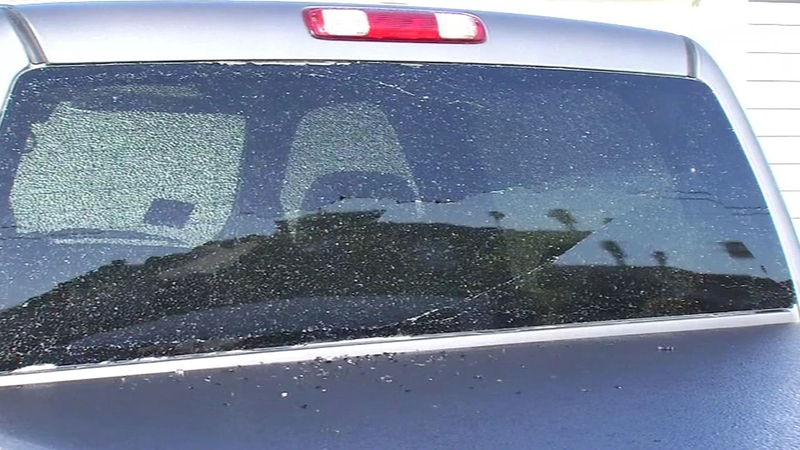 SAN LEANDRO, Calif. (KGO) -- San Leandro police are warning residents to be on alert after a string of vandalism involving the use of BB guns to shoot out car windows.

This would be frustrating if it happened once, broken glass is evidence of eight car windows shot out by BB guns on Santiago Road in San Leandro. But this isn't the first time, this has happened on Santiago Road three times this year, the most recent early Wednesday morning.

Neighbors who weren't hit, are hoping their turn isn't inevitable.

"So far lucky, we're hoping it wouldn't hit us but we're probably bound to get hit if two of our neighbors got hit in the same row," said Jane Nguyen, San Leandro resident.

In surveillance video from January, what looks like a Toyota Forerunner pulls in front of the driveway on Santiago Road and someone opens fire on the parked vehicles. Since the end of December, BB gun attacks like this have taken place in the Washington Manor and Marina District of San Leandro and in the Alameda County sheriff's jurisdiction in San Leandro and San Lorenzo. Officials say more than 100 cars have been attacked since the end of last year.

Victims and police are frustrated and just want to know why.

"We're still searching for a motive and that motive will hopefully come out when we identify who the suspects are who are responsible for this. Because it makes absolutely no sense as to why anyone would drive around at 1 a.m. or 2 a.m. and just randomly shoot out windows on parked cars," said San Leandro Police Lt. Robert McManus.

Police estimate all of the attacks could add up to tens of thousands of dollars in damage. Police are hoping the vandals will have to pay for the repairs if they are caught.