The suspect has an extensive criminal history in California and other states, including being suspected of murder.
KGO
By Stephanie Sierra 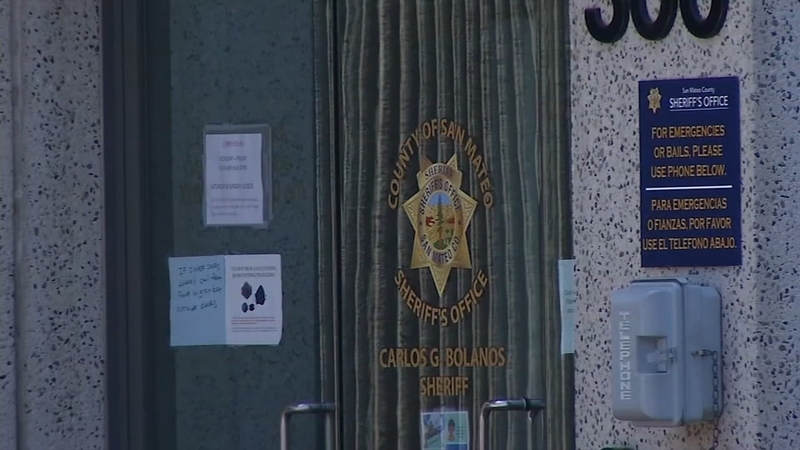 SAN MATEO COUNTY, Calif. (KGO) -- A violent felon in San Mateo County was arrested, then released, only to be re-arrested on suspicion of murder. Why? Police say coronavirus protocols are to blame.

It's unsettling knowing a violent felon was wandering near your home -- or in this case nearly crashed right into it.

That's what happened to Austin Fish.

"I thought it was a hit-and-run, or property damage at most," said Fish, a Hillsborough resident. But it turned out to be much more.

"One of our residents could overhear someone yelling for help," said Hillsborough Police Cpt. Nelson Corteway.

"Someone crashed into a fire hydrant," he recalled.

Stephanie Sierra: "Anything suspicious about the circumstances?"

Cpt. Nelson Corteway: "Yeah, the time of night, plus the fact that the person was walking away from the vehicle and the vehicle was stolen."

Later that night, Walton became a suspect for the murder of a 30-year-old woman and a 15-year-old boy who were found dead in Antioch after the crash in Hillsborough.

Questions have been raised about an $18.7 million contract to extend SF's Pretrial Diversion Program after a new assessment disproved its success.

A neighbor had reported not seeing the victims for several days, and called police for a welfare check.

That's when the bodies were discovered.

Cpt. Coretway says the officers didn't know about the murders at the time of Walton's arrest.

Stephanie Sierra: "Why weren't you aware of the fact that he was wanted on a double homicide?"

Cpt. Nelson Corteway: "There was nothing in the system yet."

There was nothing in the system because the bodies weren't discovered until later that night.

Yet, even without that case, we found an extensive criminal history for Walton in California, Tenessee, and Georgia.

Aside from the stolen car, arrest records show Mr. Walton was currently on felony probation for a carjacking out of Contra Costa County in May of last year. Plus, three other felony arrests and a felony conviction related to auto theft and resisting arrest in California. Not to mention, Walton had a bench warrant out for his arrest in Georgia for a felony domestic violence case against one of the victims he is now suspected of murdering.

Following the crash, Walton was arrested, but hours later was cited and released.

"It's pretty scary to know something like that could happen," Fish said.

Cpt. Corteway says prior to the pandemic, this wouldn't have happened.

Stephanie Sierra: "Just to be clear, if COVID protocols were not in place you would've booked Mr. Walton that night?"

But to limit the capacity in the jails, the rules changed. Corteway says Walton wasn't booked because of COVID protocols.

"Under COVID protocols we've been much more judicious to keep the jail population to the most serious crimes as possible," said Corteway.

As protesters made their stance about the "scary, dangerous, unforgettable, and unpredictable" situation festering inside San Quentin, a California assemblyman deemed this the worst prison error in state history.

Hillsborough police said they were following the protocols established by the San Mateo County Sheriff's Office.

"In an effort to minimize our correctional staff and incarcerated persons from exposure to the highly contagious Omicron variant, we have asked our law enforcement partners in San Mateo County to issue citations in lieu of booking when the crime committed is not a crime of violence," the Sheriff's Office wrote in a statement to the I-Team.

Although, several of Walton's charges met the criteria of a violent felony, according to the state penal code.

The Sheriff's Office also told the I-Team:
"We have an obligation to keep the community safe. Anyone who is brought to our jail will not be turned away and will be booked."

The the ABC7 News I-Team spoke to someone working inside the Sheriff's Office who asked not to show their face and use someone else's voice.

"It started with not booking for minor offenses, but in the last couple weeks as you have seen in the past couple cases... there have been some really serious criminals released back into our communities," said a confidential source.

"How long has this been happening?" Sierra asked.

"It's been happening for a few weeks."

RELATED: Convicted rapist plans to move to this Bay Area city upon release from jail

Lutoviko Ahoia is another example out of San Mateo County. The 23-year-old was arrested for carrying a concealed weapon and a loaded firearm in a car. Instead of being booked and held, Ahoia was cited and released. The mug shot used in the story is from one of his previous arrests when he was sentenced for a slew of charges related to DUI and reckless driving in 2019.

The San Mateo County District Attorney's Office has yet to file charges in Ahoia's case, but DA Stephen Wagstaffe told the I-Team "our office policy is to charge illegal firearm charges as felonies."

Meantime, the Sheriff's Office is struggling with a staffing shortage. The agency confirmed they're approximately 44 deputies short.

Law enforcement officers across several agencies in the county tell us they're concerned reduced staffing compounded with confusion over COVID protocols will present a risk of releasing criminals who may reoffend.

"It's a challenge because you never know what somebody's gonna do," Corteway said.

Thankfully, after Walton was released he didn't get too far. He was re-arrested by the Antioch Police Department on double homicide charges at the Redwood City Caltrain station less than 24 hours after the crash in Hillsborough.

The question is -- how many others were released and reoffended?

"They need to take a closer look at the COVID procedures," said Fish. "So this doesn't keep happening."

The San Mateo County Sheriff's Office says both deputies and officers are given discretion to decide whether to book or cite and release a suspect as long as it abides by the current COVID protocols. But, ultimately the Sheriff's Office is responsible for the booking.