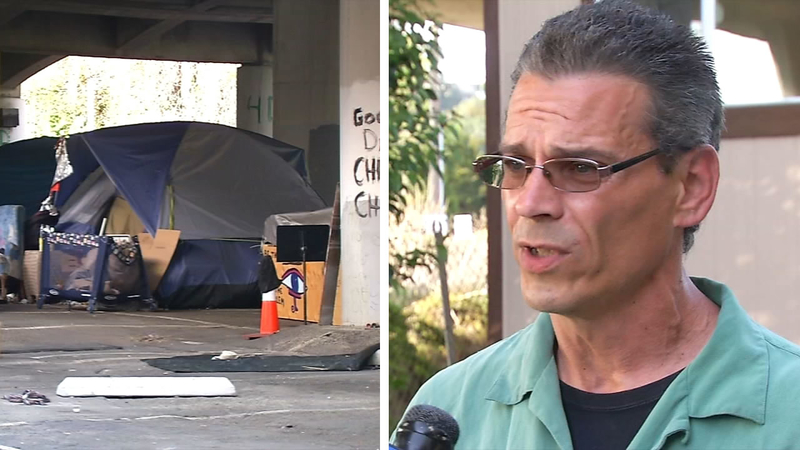 SAN RAFAEL, Calif. (KGO) -- Drive overhead on highway 101 in San Rafael, and you probably wouldn't even know it was there.

But beneath this noisy underpass near 5th and Mission, is a city managed homeless encampment.

It's where James Hellard lives.

On Wednesday, Hellard says he sued the city of San Rafael.

He claims that after living at the site for months, he and other residents have had a series of health problems.

"I've got ringing in my ears. We have coughs. We have just these slowly manifesting health problems that we're not quite sure where it's going to go to five years from now," Hellard said.

Hellard says the the conditions at the city-sanctioned encampment are unlivable.

"We're human beings. And getting in this position of homelessness is a very easy thing to do, and it's a paramount, almost impossible thing to get out of," he said.

VIDEO: 'I covered their eyes and we ran away': Family recounts what it's like living in SF's Tenderloin
EMBED More News Videos

But Hellard thinks that those with powers view him and others like him as a mere inconvenience.

"They've been getting away with this for so long that they probably didn't pay much attention to it," Hellard said.

San Rafael officials declined to comment due to the possibility of litigation.

But Hellard's wife, Dawn, says she too supports her husband's lawsuit.

The San Francisco Fire Department reports one person died and three others were critically injured Wednesday near the city's Glen Park neighborhood.

She tells ABC7 News that she hopes it will force the city to provide safer housing for them and the others who live here.

"Whatever we get out of it, we'll put back into it and really help people," said Hellard's wife, Dawn Ramsier.

Because for Hellard, the move is about more than just sticking up for himself.

It's also about sticking up for others, who he says, can't stick up for themselves.

"Most of them don't want to step out and have themselves be known, but at this point, somebody's got to do it," Hellard said.