'I covered their eyes and we ran away': Family recounts what it's like living in SF's Tenderloin 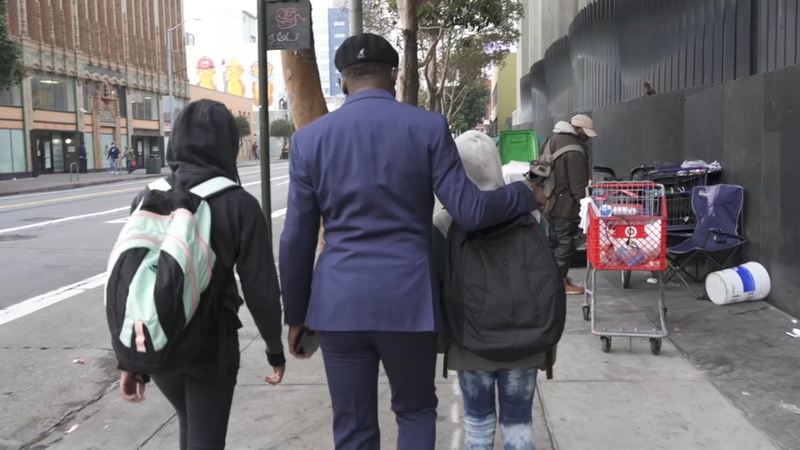 SAN FRANCISCO (KGO) -- Many parents walk their children to school for safety reasons, but not many encounter the things Jacques Bidjima and his children face on their walks in San Francisco's Tenderloin.

"Three days ago, I was walking and we found a guy, you can see puss coming from his foot. I covered their eyes and we all just ran away," recalled Bidjima, who lives in a one-bedroom apartment with his daughter, Charlee, and son, B.J.

They have two routes available. One could be described as bad, the other as awful. Today, they chose just the "bad" option.

That means walking on Mission Street for a few blocks past several suitcases tossed on the ground with clothes scattered about, a few homeless tents, and a man with no shoes on sitting on a blanket that is pulled up in front of him over his slumped head.

Many community groups are doubling their efforts to clean the streets of the Tenderloin of crime, drug dealing and homelessness.

Later, they walk past several people getting high near the San Francisco Main Library, and then a mostly clear path to Tenderloin Community Elementary School.

The "awful" route would have included going on 8th Street and later Hyde Street, where there are a lot more people either doing drugs or passed out on drugs.

"The reality is that it is worse than that," said Bidjima.

VIDEO: The uphill battle to keep the Tenderloin clean for residents

A few months after moving into the apartment, someone was shot and killed while parked in front of their home.

"A few weeks later, I was walking them to school and there was a guy that was lying on the floor shot dead with blood everywhere," he explained.

He said his children have seen people overdosed on the sidewalk on their way to school.

"I feel bad for them, that they have to go through all that stuff," said B.J., a 5th grader at Tenderloin Community Elementary School.

RELATED: 85% of SF's drug arrests happen in the Tenderloin. Police explain why

Since he can't clear the area of drug dealing himself, Bidjima instead uses those run-ins as a teaching moment to explain the dangers of drug use to his kids.

Still, he worries about what effect these occurrences are having on his kids.

"I start hating myself. How can I have my kids growing up in an environment like this? I don't have much choice," he explains.

Bidjima moved from Cameroon to the Bay Area in 2007 when he was 22-years-old.

He was married, had two children but later divorced.

He ended up living in his car that he also used to drive for Uber. Eventually, he ended up sleeping under a bridge.

Seeing his children on weekends again got him motivated. Without a home, he would rent a hotel room for the weekend to be with them, and when that got expensive, they started staying in a family shelter.

A 90-day State of Emergency in San Francisco's Tenderloin is coming to an end. Here's a look at the progress that's been made.

They eventually got referred to transitional housing and then subsidized housing, which is where they live now.

His daughter Charlee joins in the walk but takes a bus near her brother's school to Francisco Middle School, where she is a 7th grader.

"At my school, everything is proper and nice. There's nothing bad going on over there," explains Charlee.

It is just four blocks from where she lives, but she has to walk past several streets filled with people gambling and selling drugs.

"It's really crowded. There's fights and people yelling. I don't want to leave my friends but there's a lot of bad things happening here," she adds.

Charlee wrote the mayor about what she sees in her neighborhood asking for her to do something about it.

"Charlee has really become more aware of the power that she holds and also more willing to share her writing and open up to people," said Precediha Dangerfield, programs manager at 826 Valencia Tenderloin Center, where Charlee has been attending after-school programs for several years.

Dangerfield admits the students have to maneuver around some tough situations in the streets to get to the program.

"We use writing as a therapeutic tool for students," said Dangerfield. "I think it's important to not criminalize people who are struggling with mental health because personally I feel we should do more for them," adds Dangerfield.

Dangerfield runs the Black Literary Achievement Club at 826 Valencia. One of the goals is for Black students to tell their own stories.

One of the recent assignments was to set an agenda to improve lives in the Black community.

In San Francisco, Black people make up just 5% of the population, but 37% of the people experiencing homelessness.

Bidjima has a similar approach towards positive thinking.

"My mother told me it doesn't matter what kind of situation you are in, when you go outside, you have to present yourself in a certain way. It brings opportunities," he said.

Bidjima now works as a case manager for the San Francisco Office of Economic and Workforce Development.

It's contract work, so he does not feel financially secure yet to look for housing outside the Tenderloin.

He said moving out is something he talks about to his kids every day.

"It would be a blessing to walk with my kids and everything is normal. That there is no shooting or someone overdosing. That's the trauma I'm trying to take away from my shoulder and their shoulders," said Bidjima.