Community works to clean up SF Tenderloin to protect kids amidst onslaught of crime, homelessness

Plagued with crime, drug dealing and homeless encampments, the Tenderloin is also the area with the highest concentration of kids
KGO
By Juan Carlos Guerrero 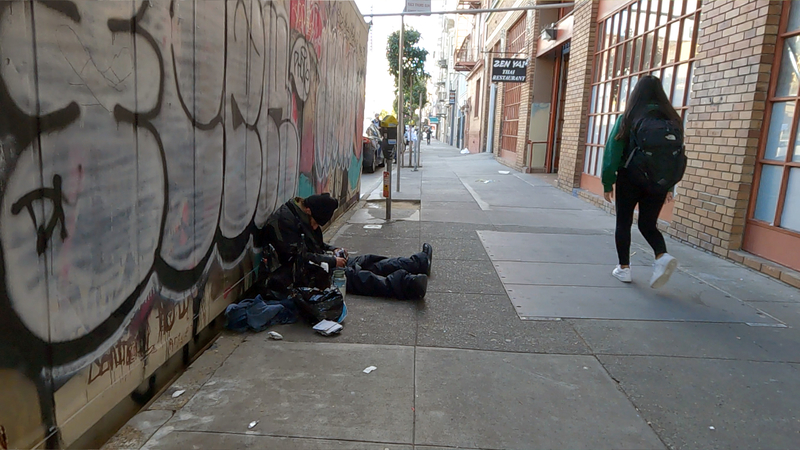 SAN FRANCISCO (KGO) -- John Mello used to work in sanitation, but that did not prepare him for what he faces every day in the Tenderloin to keep the streets clean.

"It's daunting to be honest, because we can clean the street and 10 minutes later it looks like we have never been there," said Mello, an operations manager for the Tenderloin Community Benefits District.

It's constant upkeep. On a daily basis, the TCBD Clean Team has 12 workers picking up trash and pressure washing the streets in the area.

Mello said they collect anywhere from 75 to 100 bags of garbage each day.

In a week, they haul away 17,000 gallons of street trash picked up from an area slightly bigger than 25 square blocks.

That doesn't count the amount of trash picked up by city workers, who have begun collecting trash and power washing the streets as part of Mayor London Breed's initiative to target grime and filth in the Tenderloin.

Jamillah is one of the cleaning ambassadors who patrols the streets with a broom and garbage can.

On her daily rounds, she finds piles of food containers, empty boxes and discarded clothes. But she also encounters human feces, syringes and drug paraphernalia.

As she picked up trash littering the corner of Ellis Street and Leavenworth Street, a man sat on a recliner while a woman next to him was using drugs.

"I counted 27 needles so far in this pile and I am still not done," explained Jamillah, who did not seem fearful or concerned about the drug use around her.

A few moments later, she woke up a man lying on the ground and covered by a blue tarp so that she could clean the sidewalk.

Less than an hour after the corner was cleared, the recliner had been moved to the corner. Next to it, several police barricades had been placed against the building on Ellis Street and were being used as clothing racks for someone selling jeans, jackets, shirts and other clothing items.

A few blocks away, a woman had spread out a blanket. She was selling paper towels, laundry detergent and cleaning wipes.

"They're probably stolen goods being sold on the corner for a profit," said Mello, who makes sure not to judge people who spend most of their time on the street.

"I understand people have to make a living. It's a struggle to make it in this city," he explained.

But, along with the illegal vending, Mello said there are also bigger crimes like sex trafficking and drug dealing of powerful narcotics like heroin.

"It is not safe for families," said Margarita Mena in Spanish. She has lived in the Tenderloin for 16 years.

"People have to walk on the street because the sidewalks are filthy. You walk by with kids and you see people getting high," said Mena.

The problem is not new. Fourteen years ago, she and other members of La Voz Latina got fed up and started escorting children to and from school or community programs.

Their initiative evolved into Safe Passage, a program now run by the Tenderloin Community Benefits District.

Every weekday morning, Mena and others like her deploy to street corners in the Tenderloin to help stop traffic so that families can safely cross the street.

They do the same thing in the afternoons so kids can get home or to after-school programs.

"We have a lot of people that sometimes are dealing with a mental health crisis. It's a little unpredictable in the sense that children are passing by these folks who may need support," said JaLil Turner, program manager for Safe Passage.

Turner said part of their work is to also clear the sidewalks for kids to walk safely, but they can't enforce people to move, so at times they have had to lock arms and form a barrier so kids walking by don't see people using drugs.

They get help from Urban Alchemy, which has adopted certain blocks.

They pick up trash on the street they monitor and make sure no homeless encampments or drug dealers move in.

When they see a child walking by, they communicate with other Urban Alchemy members that a child is walking through so that the person on the other corner can keep an eye out for them and make sure they get to their destination safely.

"We want children to have a fighting chance to become successful and not be distorted in the way they see things because they've been exposed to inappropriate behavior," said Artie Gilbert, Director of Operations in the Bay Area for Urban Alchemy.

It is estimated 3,500 children live in the Tenderloin, one of the highest concentrations of kids in San Francisco.

"What future outlook do they have if this is their normal day to day," ponders Mello, who continues to make his rounds on the streets.

At one point, he encounters a man shouting at an elderly man who is sitting on the sidewalk.

Police officers are looking on because someone reported the man had been abandoned there by an ambulance team. The elderly man is still wearing blue medical pants and a hospital bracelet.

A few blocks away, he encounters a resident who complains that children in a building have to walk past drug dealers on the street.

Later, he sees a man sprawled out on the sidewalk. When he stops to check on him, others tell him to leave them man alone because he is passed out from using drugs.

He stops at the corner of Polk Street and looks down Eddy Street. There is a large group of men gathered in the middle of the sidewalk.

"It is all illegal activity. Drug dealing," he said.

California's governor proposed a plan on Thursday to force homeless people with severe mental health and addiction disorders into treatment.

Mello points at all the little strips of foil paper littering the street. He explains they are left there by people heating up and injecting themselves with fentanyl.

In 2020, 166 people died from an overdose in the Tenderloin, that represents nearly a quarter of all overdoses in San Francisco.

Mello laments that despite the effort they make to clean the streets, they end up filthy again soon after their finish.

He supports Mayor Breed's state of emergency in the Tenderloin to tackle crime and filth, but he wonders what will happen when the concentrated effort ends.

"How is it going to get better? I don't have the answer. Probably consistency," he said.