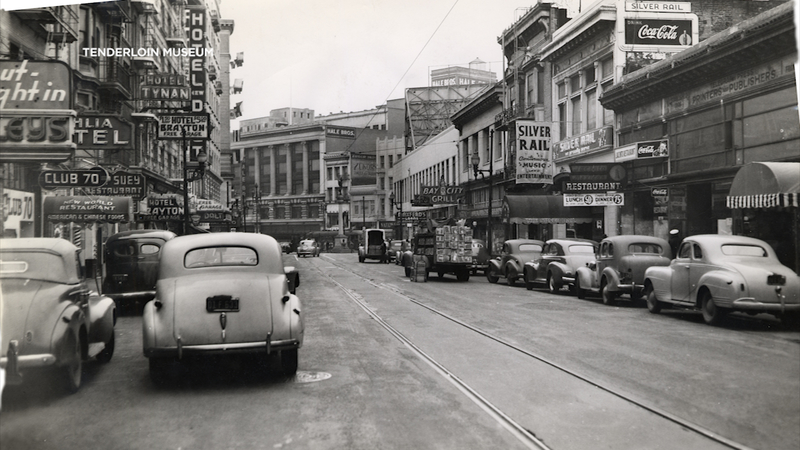 SAN FRANCISCO (KGO) -- ABC7 News is embarking on a year-long project to tell the stories of the people who live and work in the Tenderloin. That includes understanding the unique history of this neighborhood.

San Francisco's historic Tenderloin has been among the city's worse for crime, drug dealing, homelessness and sex - And it has been that way for generations.

But in our effort to Build a Better Bay Area - we ask - can this neighborhood turn around?

Let's start with a bit of history.

The Tenderloin is home to many of the city's biggest theaters, museums, City Hall, and vibrant nightlife.

While those are all places people visit, the neighborhood is also home to families, many living in homes that were designed for just one person.

Why? Because it was designed as a containment zone for the city's vice more than 100 years ago.

ABC7 News Insider, Phil Matier, sat down with the Executive Director of the Tenderloin Museum Katie Conry to find out more.

Phil Matier: "What is it about the Tenderloin that captures so many people's imagination?"

Katie Conry: "There is nowhere like it probably, definitely in this country, where there's a working class neighborhood that's right downtown of a major metropolitan area."

Let's start with the name.

Conry: "There are a lot of different theories. I mean, the name originated in New York and a cop was bragging that because he was working, like, the vice area, you know. He had been eating chuck, but now he could afford a nice piece of tenderloin. He would be on the take because he's working the vice area. And there was areas known as Tenderloins in every major U.S. city, and like the early 20th century, and ours is the last one that maintained its name."

Conry: "Yeah, the history of the Tenderloin really is about having a high density of affordable housing. And for that reason, it's also done, been a safe haven throughout its history to people that don't quite fit into society's mainstream. So it was all built like, right after the 1906 earthquake, when the neighborhood was basically burned to the ground. It was a lot of single room occupancies. It was to house people rebuilding the city and working downtown. So a single room, no, no kitchen, no living room. So these single men and women were, you know, that's when a lot of bars and restaurants started coming into the neighborhood. And it really started turning into a nightlife area. And then actually, women in the early 1900s in San Francisco, were like working their own job, living on their own, and actually going to these bars and restaurants and accompanied by men, and that was socially radical at the time. And the moral reformers who had closed down the Barbary Coast did a big campaign to close down the Tenderloin. And once the Barbary Coast was closed down, that's when a lot of brothels also were moving into the neighborhood. So it was becoming known as, like, the new Barbary Coast. And the neighborhood was effectively, like, shut down in 1917. But then prohibition came along. So then, once all the nightlife was pushed underground, then everything was more permissible again. And the Tenderloin was like a thriving, like a bit seedy, but like nightlife capital of the Bay Area in the 20s, 30s and 40s."

Matier: "It was a place you could go out and you could play a slot machine too, in the basement."

Matier: "So it's always been sort of a contained area, where things were allowed to happen, that wouldn't necessarily be tolerated in other parts of town?"

Conry: "And that's why it's also been a place where all these social justice movements and like, radical ideas started, because people that, you know, aren't part of society's mainstream are more apt to challenge it. So we saw that with women in the early 1900s, like the queer civil rights movement in America started in the Tenderloin in the early 60s. And that's a history we're really proud to showcase here."

Phil Matier: "So the social services here are entrenched... they are part of this neighborhood."

Conry: "Absolutely, they are. They're businesses that help lots of people. And really groundbreaking ideas about harm reduction, you know, all began here in the Tenderloin and are now practiced throughout the world."

Matier: "But it also allowed other neighborhoods to not provide those services or have those, because they were all down in the Tenderloin."

Katie Conry: "Yeah, the Tenderloin has been viewed as a containment zone throughout its history. And the Tenderloin, and Soma has all the services in the entire city. So there's a lot of people that have needs in the city, and they're going to come here to get the services that they need."

Phil Matier: "What do people get wrong about the Tenderloin? What do they not see?"

Conry: "Well, people suffering with issues are very visible and they're here to get help. And there's a lot of, I think, what maybe people don't see is that like, there's a lot of incredible places that help them. And that's why they're here. And that the Tenderloin did not create economic inequality, and these horrible problems that people are experiencing. It's actually a place that is here to help those people. It's an incredibly tight-knit community as well. I don't think people realize that just walking down the street that everyone knows each other. There's like, an incredible warm support system here as well."