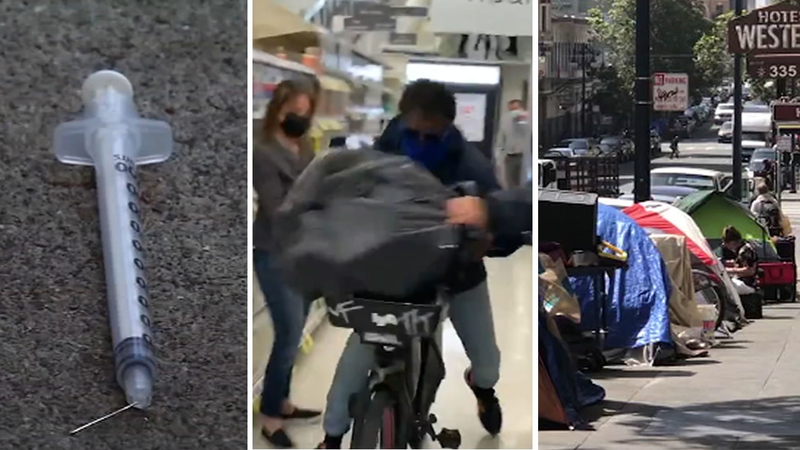 "It looks pretty bad there is no way to hide it," Brown said in an interview with ABC7 News contributor Phil Matier Tuesday.

The former mayor is speaking about the impact of high visibility crimes, the ever-present homeless problem, and the drug-addicted or mentally ill people are having on a city once known for both its tolerance and beauty.

"When you walk in certain parts of the city, you can't even walk on the sidewalk without getting permission from the people who control the sidewalk. And they are the allegedly the homeless," Brown said.

Never one to shy away from controversy, Brown lays much of the blame on the city's overly "humanitarian" ethic.

"Anything you do in this town with reference to the homeless is a political risk," Brown says. "Why? It's simple. San Francisco has a reputation for being so humane. And there are so many organizations and individuals who want to display that. They don't want you and they don't want San Francisco accused of not being humane."

Matier: "So what you're saying is that at the heart of the problem is that when it comes to the homeless and drug-addicted, San Francisco offers an array of carrots but it refuses to pick up any kind of stick?"
Brown: "No question because, you see, once you want to help the homeless, sometimes homeless don't want to be helped. And if you don't have any legal way in which to force it upon them, you got a real problem."

Brown says the only elected leader at City Hall trying to make a change is Mayor London Breed, who is drawing heavy criticism from homeless advocates for bringing in police as well as social and medical workers to deal with the problem

On the other hand, Brown says the residents of the city are fed up with the situation.

One reason for the change in heart is the images of robberies, open drug dealing, and drug use they are seeing on TV.

And that ongoing coverage is "in fact, what caused, in my opinion, the mayor's reaction," and her police crackdown in the Tenderloin, Brown says.

"No politician would move, simply because I have no reason to. Period," Brown says.

But, "I think London Breed is genuinely committed to the idea that we ought to make San Francisco for everybody," Brown said.

Whether the city's legendary "humanitarian" voters will back Mayor Breed has yet to be tested.

It's a political Catch-22 that has residents demanding a clean-up but unwilling to back the mayor when she pulls out the broom.

Meanwhile Brown says if residents don't see and feel a change on the streets then every elected official - especially the mayor - will be in peril.