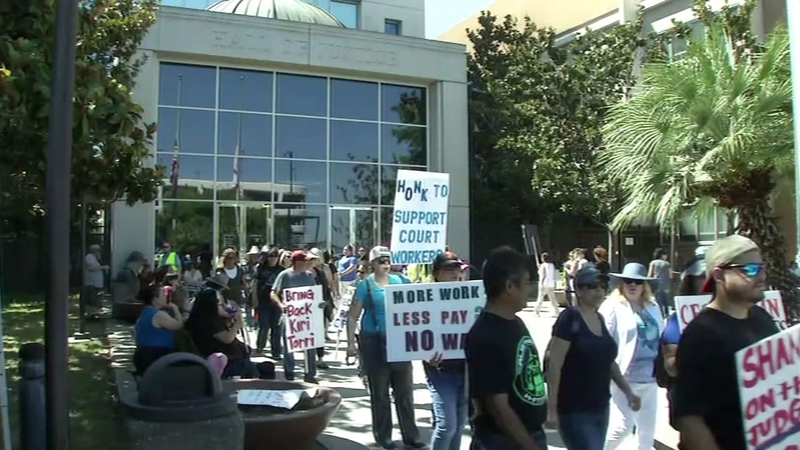 SANTA CLARA, Calif. (KGO) -- Courts in Santa Clara County scrambled Wednesday to find managers to fill in when more than 300 court workers went out on strike this morning. And that staffing shortage led to many problems.

Santa Clara County court clerks are striking and it's stalling the court system. Hundreds are on the picket lines, they say they haven't gotten a raise in eight years. The workers say the strike will continue through Thursday.

They made a lot of noise for people who normally speak in hushed tones in courtrooms.

They're raising their voices in the court of public opinion, arguing that they deserve a better deal after no pay raises for eight years.

Their absence left a void inside the courts. "My judge in that department decided to fill out the orders himself, so she had that extra responsibility this morning," Public Defender's Officer employee Sung Lee said.

Leah Tyler works as a wine steward on weekends. "It's not strong enough to support my family. I also had to move 98 miles from here to a city called Newman, California in order to afford my rent on my own," she said.

The leadership of the San Jose Police Officer's Association brought bottled water to the strikers. Its president hopes for a fast resolution because of the impact the walkout could have on obtaining arrest warrants.

Union president and courtroom clerk Ingrid Stewart says the last offer of 5 percent now and 5 percent later isn't good enough. "We're willing to go back to the table. I mean, we don't want to go out on strike, but we had no choice after eight years of no COLA's," she said.

The court's media representative didn't respond to requests for interviews.

One of the picket signs complained that a new family courts building nearing completion is opulent and offensive.

"Imported Italian marble, wood from South America. They're wondering just what exactly is going on here with the priorities. Take care of the workers or have a Taj Mahal to work in," association spokesperson Tom Saggau said.

Day two of the strike is set for Thursday.

Santa Clara Co. court workers prepping for strike this morning. Say they haven't had a raise in 8 yrs. #abc7now pic.twitter.com/YSZtcvtyZo