SAN JOSE, Calif. (KGO) -- This video not only shows the vicious attack on a store clerk, but also a customer standing only a few feet away as it happened and that customer may have saved the clerk's life.

Several people were in the liquor store when the robbery happened. No gun was used, but the robber did lob a few liquor bottles at the clerk and he was badly beaten. Then a customer stepped in.

The man walked into the Tip Top Liquor store on South Bascom Avenue and asked for the price of some bottles behind the counter. As the clerk turned his back, the robber stepped around the counter and began to grab cigarettes and liquor.

Multiple security cameras caught the suspect as he began attacking the store clerk by throwing bottles at him.

The violence escalated when the clerk defended himself, using a hoe on a long wood pole. More bottles were thrown and the robber took down the clerk and started to beat him. Another man in a red shirt was caught on camera. He's was customer who intervened beyond range of the cameras.

"He actually steps in between and kind of breaks it up and the suspect, at that point, flees the store. In this case, it definitely made the suspect stop and rethink, and he fled the scene," Kurtis Stenderup from the Sheriff's Office said.

If you were standing that close, in this situation, what would you do?

San Jose resident Susan Moreland said, "I would maybe try to grab something and try to hit the guy or whatever you could do. You would definitely try to help. I think instinct takes over."

The clerk turned down medical treatment. The liquor store owner is not responding to requests for an interview.

The sheriff's office is now seeking the public's help to identify the suspect in the very sharp video. He's described as 5'8" tall, weighing between 160-180 lbs. with black curly hair in a ponytail. He has a moustache. He wore a backwards cap with "SF" written on it and a black T-shirt that said "CALI LIFE" on the front.

The sheriff's office doesn't encourage bystanders to intervene, but those we asked what they would do said they'd try to stop an attack.

Kim Hang, a father of two, normally works the 6 p.m. to 2 a.m. shift at the liquor store. He's a very soft spoken man, but the night someone tried to rob this place, he says none of that mattered. He was just ready to fight back. 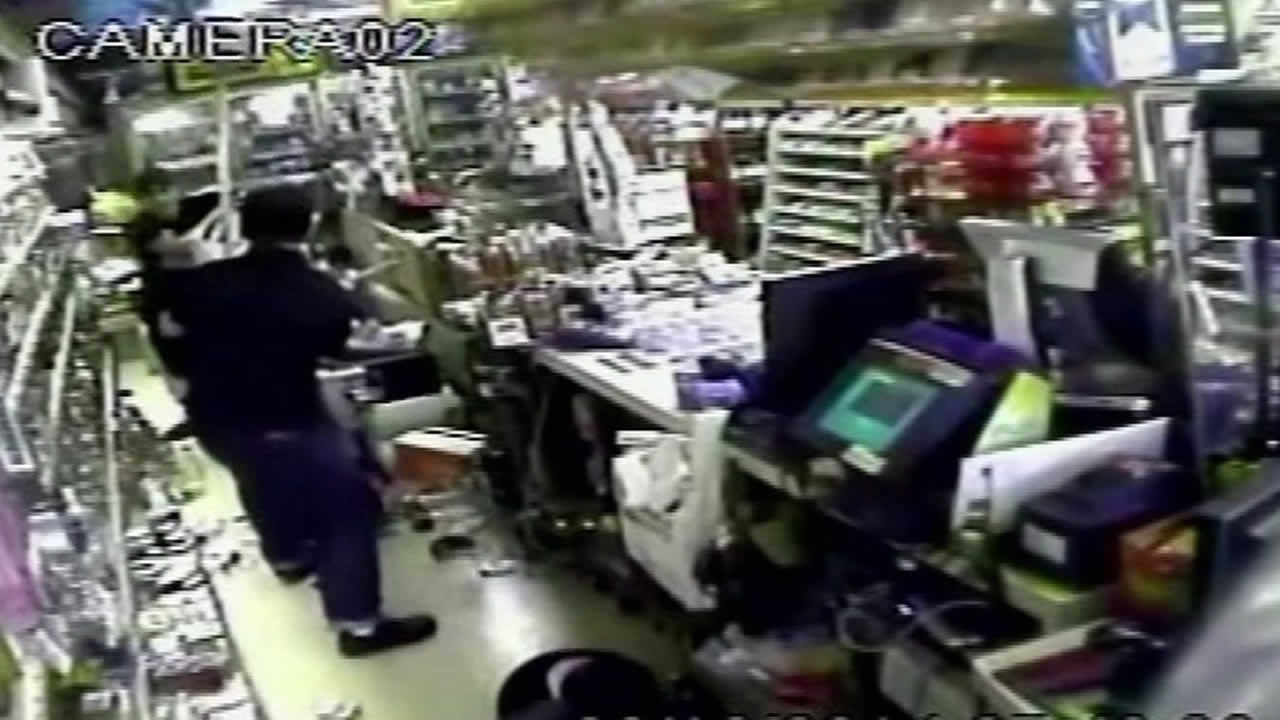 Hang loves his job at the liquor store, so when a man came in to rob the place, he knew he had to stop him.

Hang told ABC7 News "The situation happened. It it's just like with the action it's just right to do."

You can see from the surveillance video, Hang started arguing with the man, but he didn't back down. He went after the suspect with a gardening tool and the man over powered him.

Then, a customer in a red shirt got involved off camera, which caused the suspect to run away.

Store regulars were shocked by the video. We asked Hang why he risked his life to protect the store and his answer was very simple.

Hang said, "I find this job and the boss is kind of like a good heart. He's seen me doing right by him."

He has only worked at the store for a year, but he feels like a part of the community. After hearing about the attack, one customer brought him egg rolls, while another made him a card.

The suspect, meantime, is still on the loose.