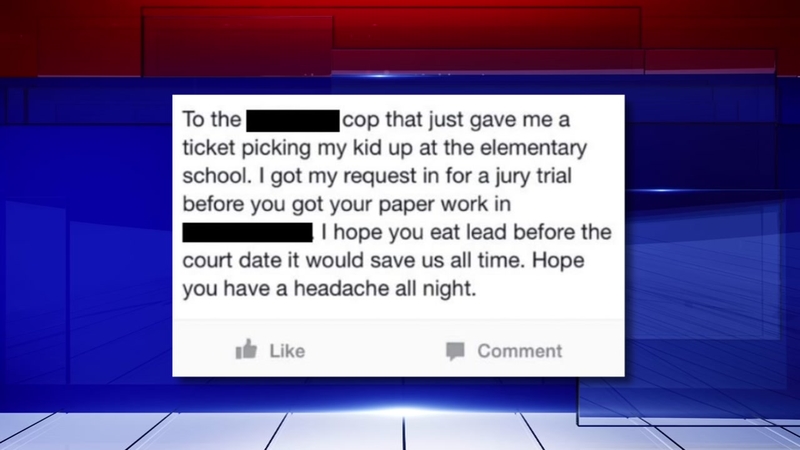 SEALY, TX -- Sealy's new police chief is making waves with words of kindness after a less-than-happy Facebook post aimed at one of his officers.

It all started with a traffic stop outside of Selman Elementary Wednesday afternoon.

"There were a few comments made toward the end of the traffic stop by the driver, but nothing, nothing outlandish or anything of that nature," says Chief Chris Noble.

Hours later, Chief Noble says his phone blew with screenshots of an expletive-laced post in a closed Facebook group. It was aimed at the officer in that stop: "I hope you eat lead before the court date it would save us all time."

The poster was the driver in that stop.

"It was disturbing that anybody would hope for an officer to be shot to death so they wouldn't be able to appear in court to handle a minor nonhazardous traffic violation," Noble says.

But the Chief fought back with a more polite post promising to treat him and his family with dignity and respect. He went on to say "it is my sincerest hope that you and your family are blessed with love and laughter as we go into the season of thankfulness and giving."

"When activism or something like this confronts you, you run towards it, not away from it. And you take the high road," he says. "I truly meant everything I said...because if his day is better then the other people around him, their day will be better too."

That driver told us on the phone that his post was rash. He was angry that the officer didn't accept his documents on his cell phone. He's apologized to the department, saying he never planned to hurt anyone, or for his post to get out to the public.

Chief Noble says the lesson everyone can learn from this is that the audience you think you're reaching on social media may not be the one you're going to get.