Discarded road flares may have sparked fires on Bay Bridge

KGO
By by Melanie Woodrow and Katie Marzullo 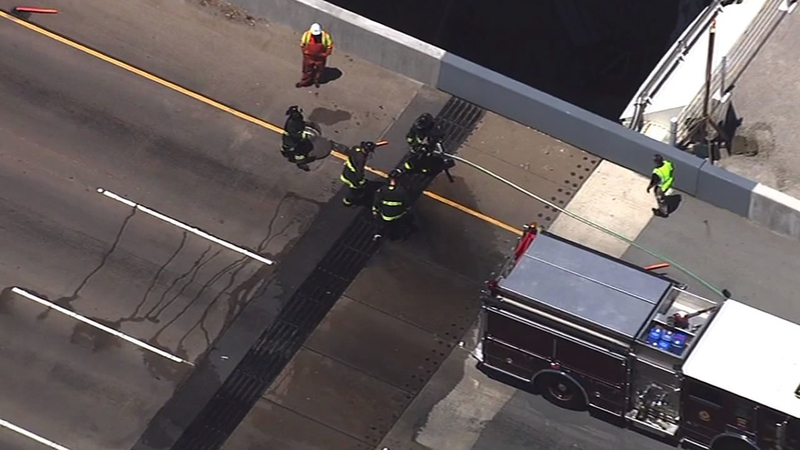 YERBA BUENA ISLAND, Calif. (KGO) -- Caltrans officials say road flares left by maintenance crews may have been the cause of two fires in an expansion joint on the new eastern span of the Bay Bridge.

The fires, one Wednesday afternoon and one Monday night, both started in an expansion joint in the eastbound lanes of Interstate Highway 80 just east of Treasure Island, according to the California Highway Patrol.

A fire coming from beneath the bridge and up through the expansion joint into the roadway was first reported on Monday around 10 p.m. near the Treasure Island exit. The fire, quickly extinguished, blocked two lanes of traffic for around an hour.

A second fire was spotted just after noon on Wednesday, with lanes reopening around 1:50 p.m.

Caltrans spokeswoman Leah Robinson-Leach said the fires damaged the rubber seal on the joint, which protects it from debris and saltwater, and repairs will be needed. However, the damage has not created any safety hazards for drivers. "The bridge is always in view and so that has a lot to do with why these fires were put out within minutes of being reported," Leah-Robinson said.

A bridge engineer discovered Wednesday's fire and called CHP and the San Francisco Fire Department who put out the fire within minutes.

The bridge seal will need to be replaced. "We will not speculate on the cause until we are very clear as to what the cause of both fires is in fact," Leah-Robinson said.

Caltrans has not yet determined when repairs on the seal and joint will take place, she said.

No one was injured in either fire.

Another fire on the Bay Bridge. I'll have details on @abc7newsBayArea at 4pm #KGO pic.twitter.com/lPQUtVaBWk