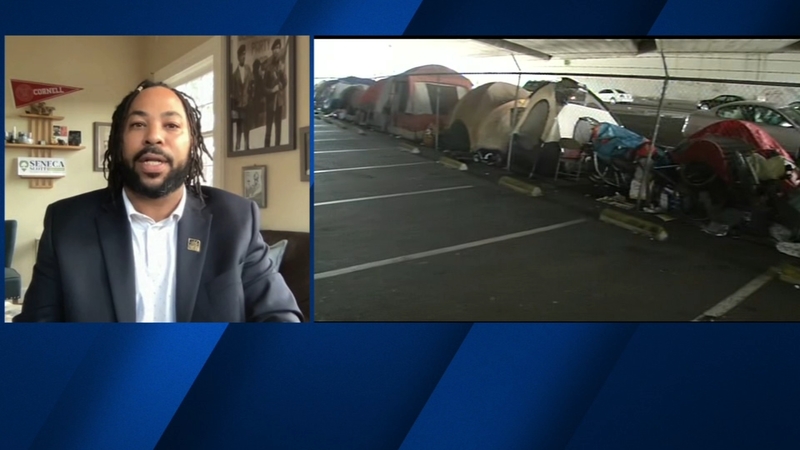 OAKLAND, CALIF. (KGO) -- Community activist Seneca Scott is the founder of grass roots organization that sued the City of Oakland over its homelessness policies.

Now, he is running for mayor.

Scott, who's the executive director of Neighbors Together Oakland, spoke to ABC7's Jobina Fortson on our digital-only newscast, "ABC7@7" on Friday.

Fortson addressed some key issues, starting with homelessness and housing in Oakland.

Scott says Oakland has an encampment management policy that was previously passed meant to balance the interest of the housed and unhoused community.

The policy makes it illegal to have an encampments 50 feet from parks, residents and business, unless it's attached to a nonprofit or city service.

He says residents in the unhoused community cannot be evicted without offers of housing.

Scott knows there isn't a lot of housing available in Oakland, but needs to be a priority. He says the city has allocated $3.5 billion over the next years with a focus on housing, but has one concern.

"My concern is the efficiency of which we're spending that money and the priorities," Scott said.

He also says there needs to be a focus on drug access and addiction within Oakland's unhoused community.

Forston also asked Scott about public safety, and says crime is another major issue in Oakland.

She says it's not only property crime, which used to be the biggest issue prior to the COVID-19 pandemic, but now violent crime, including the increased shootings in Oakland neighborhoods and freeways.

"We need better-trained police and we need more of them," said Seneca Scott. "We need to end this war between the moderates and progressives that our citizens suffer in activity around policing."

The election is on November 8.

You can watch the full interview in the video player above