Supporters of San Francisco school board recall rally to get out the vote ahead of Feb. 15 election 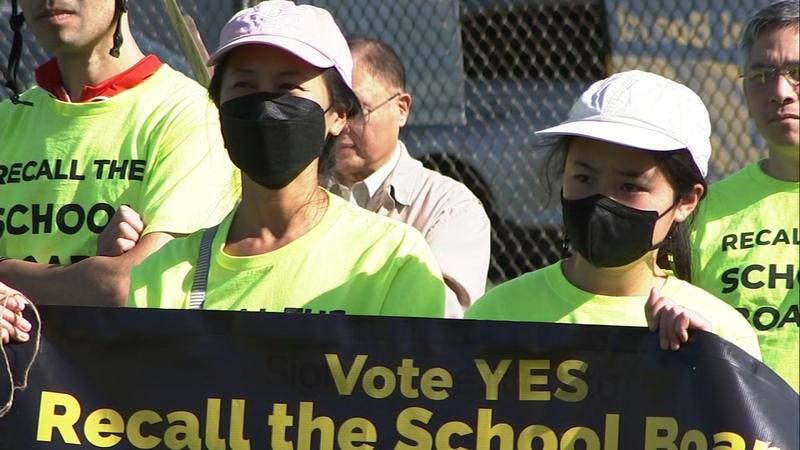 SAN FRANCISCO (KGO) -- The countdown is on to San Francisco's special election on Feb. 15.

Several races are on the ballot and three San Francisco school board members are facing recall, supporters held a get out the vote rally Saturday.

Volunteers stood on 19th Avenue in San Francisco, reminding voters why Feb. 15 is so important.

"Especially when the future of our kids is at stake so we have just a few more days to get out the vote," said parent Autumn Looijen.

ABC7 News anchor Liz Kreutz breaks down what you need to know about the upcoming election in San Francisco.

Many of the parents have led recall efforts against three San Francisco School Board members, Gabriella Lopez, Alison Collins and Faauuga Moliga.

Frustrated parents say it took too long to get their kids back to in-person learning.

"We already live in a city with extreme disparity, this action by the school board only made those disparities worse, kids like mine have fallen behind," said parent Siva Raj.

"The school board chose to rename schools instead of reopening them, they put our kids suffering through Zoom school longer than necessary, they have driven schools into a financial ditch," said recall supporter Joel Engardio.

Supporters of board member Faauuga Moliga are urging a no vote on the recall.

"This attempt to recall me is unjustified. Arguments made by proponents are false. My focus before and during this pandemic has been on increasing enrollment, fiscal responsibility and improving learning and health services for students and families."

In addition to the recall, there's two other races on Tuesday's ballot.

The position of assessor-recorder is up for grabs. The other is a primary for 17th Assembly District voters, who will choose a replacement for assembly member David Chiu who stepped down last year to become city attorney. the frontrunners are David Campos and Supervisor Matt Haney.

RELATED: Breaking down the race for San Francisco's Assembly District 17

Early voting by mail and in-person at City Hall has been happening for several weeks. Elections Chief John Arntz says so far turn out has been light, about half the voters who came out for last September's recall effort against Governor Gavin Newsom.

In-person voting will continue at City Hall through Tuesday.

Mayor London Breed is backing the school board recall effort, she's also the person who will appoint a temporary replacement should any of the board members be recalled. We reached out the the other two school members facing recall but have not heard back.