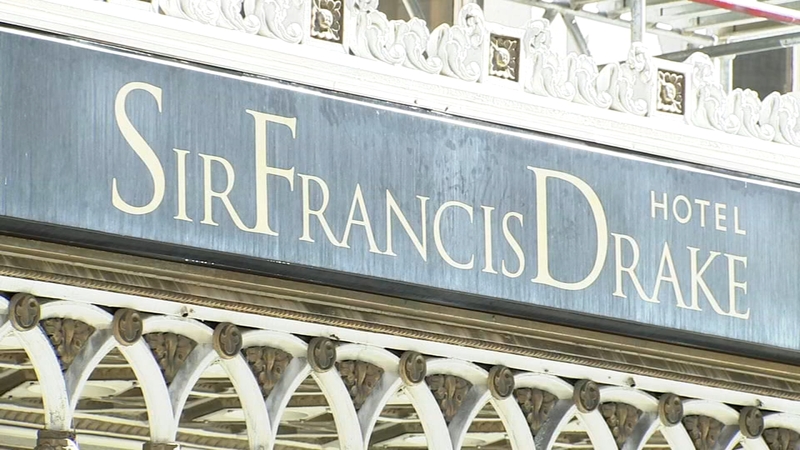 SAN FRANCISCO (KGO) -- The iconic Sir Francis Drake Hotel opened in 1928 and now 94 years later it's changing from the inside out. Starting with its controversial name.

"His name doesn't have to be honored. Put him in a museum talk about him within the full context of what he did," said Noah Griffin, Civil activist and Tiburon Council Member.

Noah Griffin is a Bay Area civil activist who's been behind the name change of several places.

San Francisco Mayor Breed asked officials to work with the community so that art, including statues, reflect the values of the city after statues of Francis Scott Key, Junipero Serra and Ulysses Grant were torn down in Golden Gate Park.

"They think of him as the father of enslavement in the British empire. It was in the 1560s with the help of Elizabeth I. That he and John Hawkins enslaved the first folks out of western Guinea and also Sierra Leone for quite a profit and began the British Empire slave trade," said Griffin.

Now, the hotel will be named the Beacon Grand.

"It's the 21st century, you got to change with the times," said Tom Sweeney, Former Chief Doorman at the Sir Frances Drake Hotel in San Francisco when referring to the remodel and changes happening at the hotel before its grand reopening.

Tom Sweeney is the legendary doorman of the Sir Francis Drake Hotel. He retired in 2020 and says his uniform will also go.

"They are going to retire my uniform," said Sweeney. "I have them lined up at home like an old soldier."

The name change is also part of the rebranding.

"We're excited to share the extraordinary story of the Beacon Grand - the name change and the many new and refined experiences from street to star - as soon as the details are finalized. I promise it will be worth the wait," said Sebastien Pfeiffer, General Manager of the Beacon Grand.

The hotel has been closed since March of 2020. The Northview Hotel Group that purchased the iconic hotel says they'll reopen this spring.

The superintendent of the Tamalpais Union High School District said a group of staff members came forward to the district in June with a desire to change the name of the high school.

"We think that this is going to bring a much-needed acceleration of the economy to the area. It's really a sign of visitors and tourists coming back to San Francisco," said Marisa Rodriguez, Executive Director of the Union Square Alliance.

The hotel was not asked to change its name, but Noah Griffin believes it will only benefit them.

"I think it was very smart for them to change the name. They bring new attention to the hotel," said Griffin.