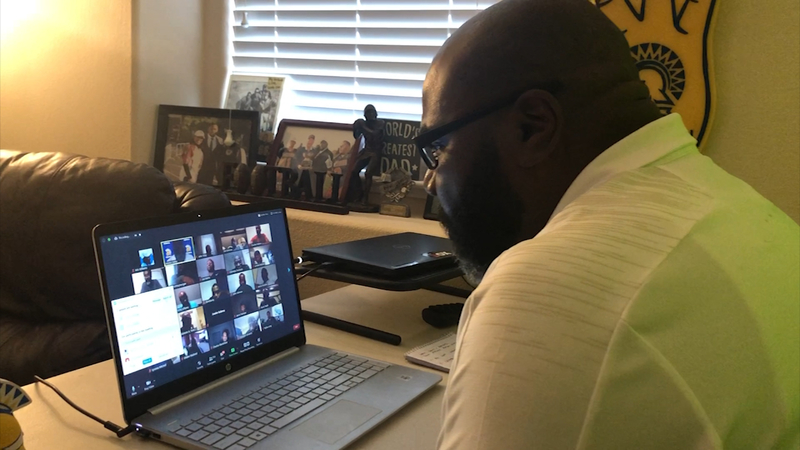 SAN JOSE, Calif. (KGO) -- As protests calling for equality continue in our country, a need for open dialogue about change is emerging.

At San Jose State University running backs coach Alonzo Carter is bringing hundreds of coaches together nationwide to have that conversation with his new initiative called "Listen, Learn, Network."

San Jose State University has a tradition of social justice heroes, with reminders still on campus.

Today, that lives on.

"Tommie Smith and John Carlos in the 1968 Olympics," Carter said. "C'mon man, everyone talks about that. That's a tradition here at San Jose State. But, don't just get caught up in the visual, understand the message and the meaning behind that. Currently, we are bringing that all together."

RELATED: Cal running back Marcel Dancy is a community super star -- With Authority

Head Coach Brent Brennan encouraged the Spartans staff to make the best use of their time away from football due to the coronavirus pandemic.

"A person like myself, that's from the inner city of Oakland, you understand how it is to be on the other side," Carter said. "I think that's how you figure out what the problem is. You have to listen to each other, you have to learn from each other and you have to understand what someone else is going through. The only way you are going to learn that is by listening to me. If you listen to me, then you can understand my pain and that's how we can grow together."

The calls feature high school, college and professional minority coaches from around the country.

Chiefs coach Eric Bieniemy and 49ers coach Jon Embree have even joined to speak to the group.

These are names you can only get in one place if you have some clout.

Coach Carter gained notoriety through his recruiting skills, some of the best in the country, and, of course, through his MC Hammer dance moves.

His new initiative even helped him appear on ESPN.

.@RealCoachCarter is awesome in so many ways. This is just the latest reason. I love to see the great work the entire @SanJoseStateFB does to help the community. https://t.co/FzX6JMtc3P

Now he's using his fame for change and he hopes others with a similar platform can do the same.

"I used my platform as a coach, and having so many relationships, and I took those relationships and brought people together and tried to get people to understand that together this thing can be solved. It's not going to happen overnight, but if we can get people to understand how to educate each other on what we can do to get better, we can take baby steps and baby steps turns into a journey."

A journey that continues the tradition at San Jose State.

I walked by the statues of Tommie Smith & John Carlos, outside the journalism building at @SJSU, every day. I didn’t just walk by blindly, I thought of the lesson from these 2 heroes: Stand up for what you believe in to help make the world a better place for ALL. Still true today pic.twitter.com/O4yZZ8vAR1