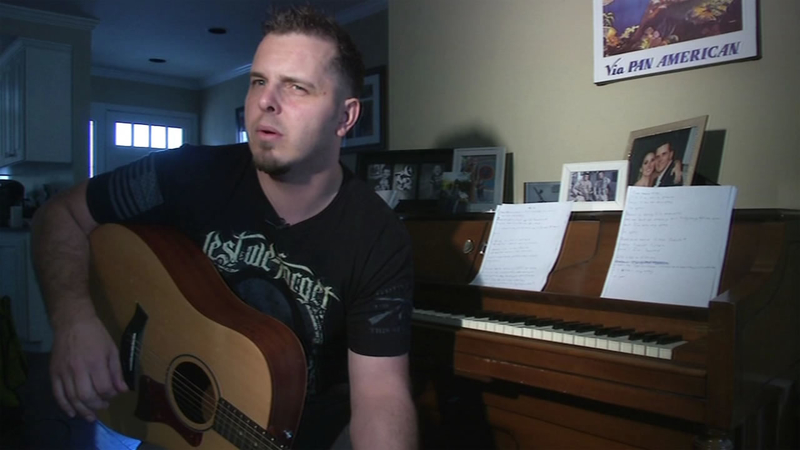 DANVILLE, Calif. (KGO) -- A Danville veteran knew his mission wasn't over once he left the battlefield. He put down his rifle and picked up a guitar. The local Marine is helping fellow vets with music.

John Preston recalls when he joined the Marines, right before 911.

He served in Iraq.

"When I got there, I instantly was lost," Preston said. "I was in a whole different world. It's funny because music helped me find myself while I was there."

He remembers providing security outside a school construction site. "The kids would start clapping and chanting, 'Good, good American, good, good American.' I'm like, aw man, this is awesome. I remember thinking, I'm going to have to write that."

When his tour of duty ended, a new tour began. Preston was making it as a musician in Los Angeles, but he couldn't stop thinking about the war.

"At that point, I was crammed so deep in a bottle, drinking to blackout every night. I didn't understand what I was going through. You know I was fighting PTSD and I had no clue," Preston said.

His father, a Purple Heart decorated Marine, knew what was happening. He got his son to put the bottle down and get his life back on track. Preston moved to the Bay Area, got married and became a firefighter.

For many, the war isn't over once walking off the battle field. Though statistics have been difficult to nail down for Post Traumatic Stress Disorder, or PTSD, it is believed that a staggering 30 percent of military men and women have been gripped by it.

Though Preston was able to move forward, he still had another calling, to sing about what he knows best the mental scars of battle.

Music has been Preston's catharsis and he uses it to give back.