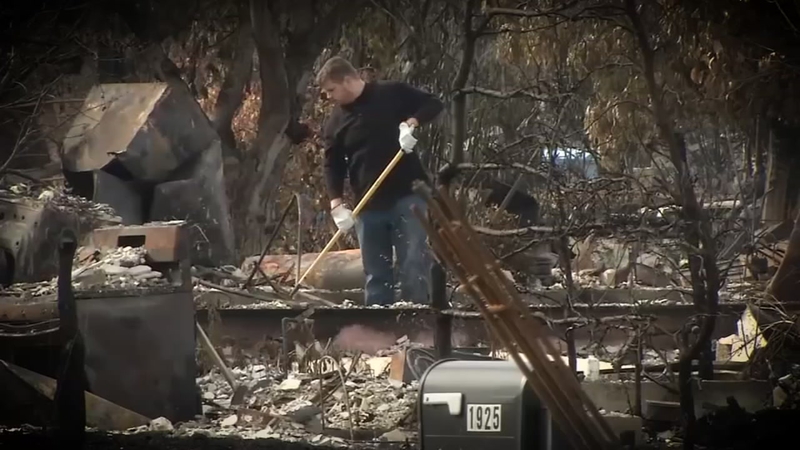 We've spent all of today in Coffey Park in Santa Rosa. As residents finally returned to their homes (on Day 12), it's fire-stirred rubble into chaos.

Some people here wanted to be left alone. Others wanted to talk.

Among them, Donna and John Pittman. That's John giving her a helping hand out of what had been home since 1994.

As Santa Rosa residents finally returned to their homes after the devastating North Bay Fires -- they searched the ruins where their homes once stood for memories.

He's a Vietnam veteran who though he had seen and lived through bad enough, until this. A guy who thought he can fix anything. His tools survived -- sort of.

Donna is a teacher.

Together, they welcomed us into the remains of their home, just one one of many in this neighborhood filled with so much loss.

In the rubble, John found a watch and his wedding ring. He put the ring on immediately.

Following the devastating North Bay fires, Santa Rosa residents returned to search the ruins where their homes once stood for memories.

Donna found a ceramic from her grandmother, Alma.

She, too, looked for anything significant. "A mattress, you recognize, but insurance will replace that." She grieved family pictures, gifts, mementoes, and talked about watching disaster after disaster strike the nation, this summer. "Then I wake up, and it happens to us."

No one can appreciate what these residents are going through unless they have done so, themselves.'

In 30+ years of marriage, Barbara and John Pittman never imagined crossing a threshold this way. Today, they did. #Coffeypark #abc7now pic.twitter.com/dct9FGHUMI

They celebrated. "You think you know what matters. This changes that," said Donna. "Now we really know." #coffeypark #abc7now #sonomafires pic.twitter.com/BPjBQAgGXQ

Barbara Nichols lived in #coffeypark from the start. "I tend to be optimistic in nature," but this tested her. #sonomafires #abc7now pic.twitter.com/d44q4fyFxN