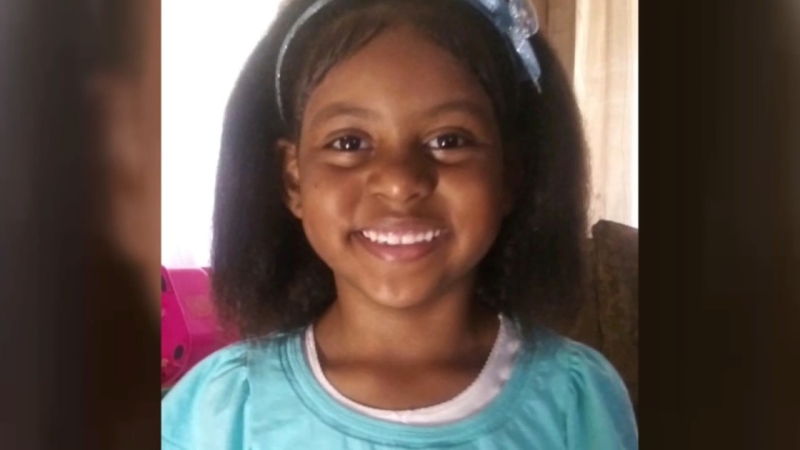 MERCED, Calif. (KGO) -- Details are still coming in regarding a horrifying story out of the East Bay. A Hayward mother is facing a first degree murder charge in the death of her 8-year-old daughter.

The girl's body was found at the mother's boyfriend's home in Merced, California last Friday.

Police have confirmed the remains were that of 8-year-old Sophia Mason.

Video given to ABC7 News by family members shows the young girl enjoying herself on a playground last June - Likely one of the last videos showing a girl described by her family as "bubbly" and "outgoing."

"More than anything it makes me angry, upset, and heartbroken at the same time," says Melanie Verlatti.

Authorities have confirmed to Action News the child who was found dead inside a Merced home last week is eight-year-old Sophia Mason.

Verlatti is Sophia's second cousin, who along with other family members, were officially notified Tuesday that the remains found in Merced were Sophia's.

The girl's mother, Samantha Johnson, seen only in a booking photo, is facing first degree murder charges, but has not yet entered a plea.

Officers say the Merced home where Sophia's remains were found, belonged to her mother's boyfriend Dhante Jackson, who is now wanted in connection with the murder.

"Most of the people who lived in the neighborhood rarely saw people coming from the house, most people thought the house was abandoned," said Lt. Joseph Perez of the Merced Police Department.

Verlatti says Sophia was living with a family member and going to school in Hayward when her mother picked her up and took her away last October. A report had been filed with Child Protective Services, but Hayward Police say the allegations were unfounded at the time. Verlatti says family members last spoke with Sophia in February.

"They felt like, my aunt did and my cousin, that something wasn't right this time and something wasn't okay," said Verlatti who continued saying, "Just a wonderful little girl whose life was cut tragically short. The times I did see her she was always so bubbly and outgoing."

Officers tell ABC7 News that the second suspect, Dhante Jackson, worked in the Bay Area but has been known to frequent the Los Angeles area as well. His whereabouts still unknown.

Anyone with information about the case is urged to contact Detective John Pinnegar at (209)388-7712 or by email at pinnegarj@cityofmerced.org.