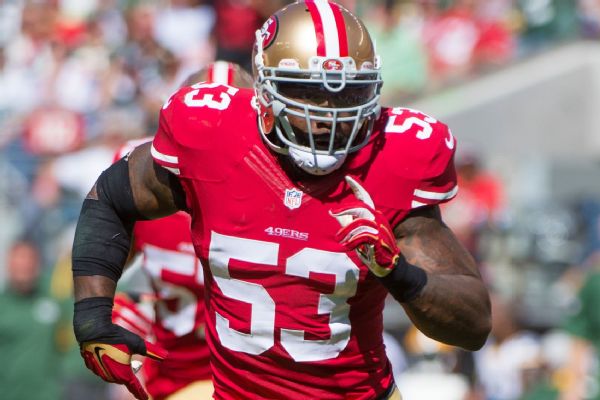 WASHINGTON, D.C. - After a long and distinguished career with the San Francisco 49ers, linebacker NaVorro Bowman is no longer a part of the only team he's ever known.

The Niners announced Friday afternoon that they'd released Bowman after general manager John Lynch and coach Kyle Shanahan had a conversation with him on Thursday night.

That conversation led to the 49ers attempting to find a trade partner to give Bowman a new start elsewhere. However, no deal was made and, just like that, Bowman's seven-plus year tenure in San Francisco was over.

"When Kyle and I came into this, we said we knew that we would have to make tough decisions, if they were in the best interests of our team," Lynch said. "We felt like this was. We had a good, I think, honest and fruitful conversation with NaVorro. We left in a good place. We appreciate, and I spoke to [CEO] Jed York a little bit ago, he wanted to express on behalf of the York family how much we appreciate what NaVorro Bowman has done for this organization, long before we ever came and while we were here."

The wheels began spinning on a possible Bowman departure last week when Shanahan told him of the team's plan to begin limiting his snaps in games. That played itself out last Sunday against Indianapolis when Bowman played 58 of 76 defensive plays, well short of his usual full workload in which he rarely comes off the field.

After that game, Bowman voiced his frustration to reporters, acknowledging that he did not like the decision to get him extra rest and repeatedly saying "I don't know" when asked if he at least understood the rationale behind it.

Even after Bowman made his stance known publicly, Shanahan said Monday the plan to get him rest during games would continue moving forward. On that same day, Lynch spoke to Drew Rosenhaus, Bowman's agent, who let it be known that if Bowman was not going to be an every-down player, he would prefer to be traded.

Lynch said he waited a few days as a sort of "cooling down" period before he and Shanahan spoke with Bowman on Thursday night. It was in that meeting that Bowman reiterated a desire to be dealt if he was going to continue to be taken out in games.

According to Lynch, he called all 31 teams to gauge interest in Bowman and there were a few that answered in the affirmative. Lynch said a deal could have been made with one team but it wasn't one Bowman wanted to go to.

So, out of respect for Bowman, the Niners didn't make the deal and released Bowman, who can now pick his next team.

"We thought we had something pretty good," Shanahan said. "And we did. And (it) really didn't work out the best way that Bo wanted. And so, we're not going to sit there and try to be greedy with anything. Especially with who we're dealing with. We've got too much respect to do that to him and we're going to give him the chance to go have 31 other (options)."

Even after the Niners began shopping Bowman on Thursday, Lynch said Rosenhaus called on Friday morning and offered an olive branch, saying that Bowman was now willing to accept the reduced role and would say so publicly.

Lynch, drawing on his experience near the end of his time with the Denver Broncos and then-coach Mike Shanahan, said at that point it would have been difficult to welcome Bowman back, especially into a locker room in which the team is attempting to establish a new culture.

"I've been exactly where NaVorro has been," Lynch said. "It was actually with Kyle's dad. It was a very similar situation, where they were starting to pull me off the field. The plan was on third down I didn't feel like the people they were putting in front of me were better players than me. He tried to convince me it was in my best interest. Ultimately I went to Mike and said, as friends, I respect you too much. I don't want to be the guy that's coming in in a bad mood. I've never been that guy. And I want to pre-empt that. That didn't happen, but Bo was very honest with his feelings... But, having been through that myself, once you're there, mentally, people feel it in the building."

The 49ers will now move ahead with rookie Reuben Foster, taken in the first-round of this year's draft, as the middle linebacker. That could happen as early as Sunday against Washington, though Foster is working his way back from a high ankle sprain and it could take a little longer before he steps in permanently.

Either way, Foster's return figured to play a part in the continued decrease in Bowman's playing time.

"Reuben Foster is closer to coming back," Lynch said. "And we want him eventually to be our Mike linebacker. We wanted him to have that role. And so, he was already dealing with reduced reps. He was probably going to have those reps cut into a little more."

San Francisco must also deal with the salary cap ramifications of Bowman's release. He signed a lucrative contract extension last year and his release will result in the Niners having to eat more than $10 million in dead money, though they can easily take it on with more than $60 million in cap space left this year.

As Bowman begins searching for a new team, he carries with him one of the finest resumes a linebacker has ever put together. In his time with the 49ers, Bowman became one of four players in franchise history to have four first-team All Pro nods and finished his time in the Bay Area with 709 total tackles, 12 1/2 sacks, 7 forced fumbles and 4 interceptions.

Bowman also provided some of the most memorable moments in franchise history, including his 89-yard interception return for a touchdown that nailed down a playoff spot in 2013 and closed down Candlestick Park and the pass breakup in the NFC Championship game that sent the Niners to Super Bowl XLVII.

All of that despite a knee injury that kept him out for the entire 2014 season and an Achilles injury that cost him the final 12 games of last season.

Through the first five games of the season, Bowman had 38 tackles but he'd also played 333 snaps, second-most among linebackers and a part of the reason the Niners wanted to get him rest in games.

Still, that didn't make saying goodbye any easier for the Niners.

"He's given his heart and soul for this organization," Lynch said. "And I know he's a fan favorite. So, this isn't going to be easy for the fans, but Kyle and I felt like it was in the best interest of our team and so we've acted accordingly."
Report a correction or typo
Related topics:
sportsespnsan francisco 49erstradenflnavorro bowman
Copyright © 2020 ESPN Internet Ventures. All rights reserved.
More Videos
From CNN Newsource affiliates
TOP STORIES
Following 60-hour shift, firefighter rushes to save home