AFC holds off NFC as Pro Bowl 'gets chippy,' goes to wire 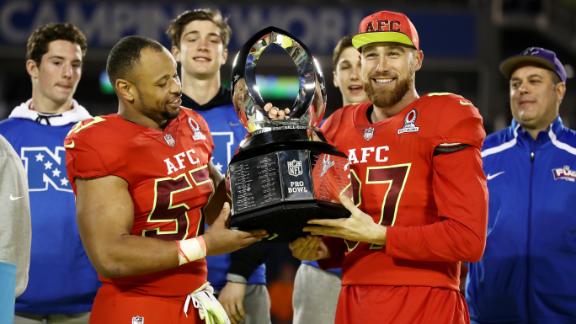 ORLANDO, Fla. -- The Pro Bowl has long been more about showmanship than competition. Clearly,Lorenzo Alexandermissed that memo.

The Buffalo Bills linebacker could have just sat on a late interception for the win, but instead, he opted to return the ball 20 yards and lateral it to Aqib Talib, who came within 13 yards of the end zone in the AFC's 20-13 win over the NFC on Sunday in the NFL's all-star game.

"I was serious about that last drive," Alexander said. "You're playing fast, playing hard, having a good time, but we wanted to win. We took it very serious."

That much was obvious on the final drive, on which Alexander, named the game's defensive MVP, got tight end Jimmy Graham on a hard hit over the middle as the NFC drove the ball downfield for what could have been the rallying game-winning drive. A couple plays later, the ball went off Graham's hands and right to Alexander, sealing the game.

Even on that play, the increased competitive spirit was obvious when quarterback Kirk Cousins stuck with the play after throwing the interception and knocked the ball out of Talib's hands on a jarring hit to save a touchdown. Although many of the 60,834 fans had already left Camping World Stadium, those who stuck around saw a thrilling end.

"It was fun, and it was competitive," Alexander said. "It got a little chippy there late in the game, but that's part of it when you have competitive people."

In the recent past, the Pro Bowl hadn't produced a competitive environment. But perhaps the return of the traditional AFC vs. NFC matchup, combined with playing in front a larger crowd than when the game was played in Hawaii, amped up the intensity.The past three years, the Pro Bowl had been played with a format in which designated captains drafted teams from among the players.

"This game was definitely more competitive than last time I played in it. I can say that," Talib said. "Guys played a lot harder this year."

In a first half defined by big plays and key interceptions, the AFC was able to come up with one more play to take a 14-7 lead into halftime and a 20-7 edge early in the fourth quarter.

Andy Dalton's 23-yard touchdown pass to Kansas City Chiefs tight end Travis Kelce, named the game's offensive MVP with three catches for 36 yards, put the AFC ahead 14-7 with 1:40 remaining in the second quarter. The touchdown was set up by a 36-yard punt return to the NFC 38 by the Chiefs' Tyreek Hill.

"I thought the level of play was really good. It was really competitive," said Dalton, the Cincinnati Bengals quarterback who completed 10 of 12 passes for 100 yards and one touchdown. "It came down right to the end. You can't ask for much more than that in any football game."

It was a relatively low-scoring game defined by big defensive stops, including a goal-line stand on whichZach Brown stuffed Dallas Cowboys rookie running back Ezekiel Elliott at the 1-yard line in the first quarter.

The play seemed to set the tone, as both defenses gave up little against the run and put pressure on all the quarterbacks, which has not always been the case in the Pro Bowl.

"We were having fun, but we were definitely out there competing, definitely playing to win," said Cousins, who led the NFC on two fourth-quarter drives that ended with field goals but could not get the ball into the end zone. "Everybody was giving their all on both sides of the ball at the end. It made for an exciting finish."

New Orleans' Drew Brees completed 10 of 19 passes for 112 yards and one touchdown to Seattle's Doug Baldwin to lead the NFC. Kansas City's Alex Smith, the starter for the AFC, completed six of eight passes for 74 yards, including a 26-yard touchdown toss to Tennessee's Delanie Walker early in the second quarter.

AFC comes out on top in Pro Bowl
It came down to one possession in the fourth quarter, but the AFC held on to top the NFC 20-13.

AFC comes out on top in Pro Bowl
It came down to one possession in the fourth quarter, but the AFC All-Stars hold on to top the NFC All-Stars 20-13.