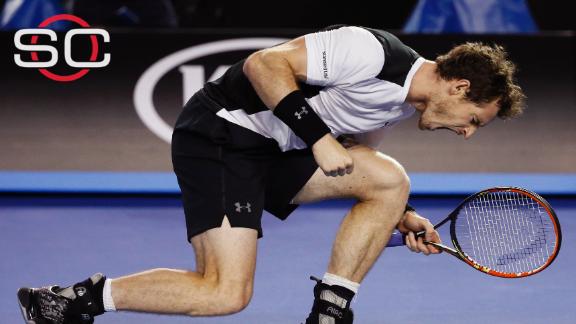 MELBOURNE, Australia -- With so many distractions the past two weeks, Andy Murray has found his oasis on the court, even when things aren't going his way.

Murray's latest run Down Under comes with the impending birth of his first child and the scary collapse of his father-in-law, Nigel Sears, last week. Even older brother Jamie Murray has powered through to the men's doubles final, making them the first brothers in the Open Era to reach the finals in both events at a Grand Slam.

But on Friday, Andy Murray's biggest complication came from his opponent. The 14h-ranked Canadian crunched 23 aces and 72 winners, but ultimately, Murray's perseverance and patience made the difference.

"Just tried to keep going, keep making as many returns as possible and continue to make it difficult for him," Murray said. "Eventually, I was able to engage in more baseline rallies and dictate more of those points, which made him do more of the running."

Raonic set the tone in the first game, first breaking Murray's serve at love and then his spirits with bruising serves the Scot didn't bother swiping at.

In Raonic's opening service game, Murray had triple-break point, and though he failed to convert, he finally capitalized on set point with a blistering service return that Raonic dumped into the net.

Unfazed, Raonic began hitting even bigger, but Murray was serving with just as much efficiency. The frame eventually went to a tiebreaker. At 4-2, Raonic clocked an overhead from his baseline for a clean winner. Eventually an ace gave the Canadian the lead.

But down 2-1 in the fourth, Raonic pointed to his upper right leg and called for the trainer -- an injury he later described as an adductor issue. While there were no apparent signs of injury, he was broken at love a few games later. An inspired Murray took control, even channeling Lleyton Hewitt with a wild lawnmower-pull celebration after a clutch volley winner on break point.

After Raonic opened up the fifth set with a double fault on break point, he lost his cool and demolished his racket on the court.

"I think maybe that's why I sort of lashed out after I did at the start of the fifth set," Raonic said. "I guess that was sort of just the whole frustration of everything sort of getting out. I don't think that's like myself to do, but sometimes it's a little bit too much to keep in."

Murray rolled the rest of the way. The final point, a forehand winner, sent him back into a final he is intimately familiar with.

"Five finals is a great achievement," Murray said. "You can't take that away from me. I should be happy about that. There's very few players that will have made five Australian Open finals, so I have to be proud of that achievement."

From the start of this tournament, Raonic emphasized efficiency. But his stamina was what ultimately carried him to his finest Slam to date.

In the fourth round, he outlasted 2013 Aussie Open champ Stan Wawrinka in five tense sets. In the quarterfinals, he took down tricky Gael Monfils in a long four-setter.

As disappointing as this result was for Raonic, he found some solace afterward.

"I'm in a much better state where I was 18 months ago when I was in my first semifinal of a Grand Slam," Raonic said. So I think I was giving myself chances and I was fighting hard. I was doing things right. It was just sort of how the story played out after."

As for Murray, timing and history aren't on his side.

His next opponent, 10-time major champion Djokovic, sanitized his game in a big way against Roger Federer on Thursday night.

Just days after doling out an astronomical 100 unforced errors in his fourth-round tilt, Djokovic took apart the Swiss champion in a merciless four-set win. Djokovic, who said the first two sets in particular were the best he's ever played against Federer, said he's rediscovered his "self-belief, confidence, intensity and concentration."

If that's not an ominous sign for his opponent, Djokovic, who is 21-9 against Murray, is already a five-time winner Down Under and is currently riding a 20-match Grand Slam winning streak. And, to boot, Djokovic will have an extra day of recovery.

"There's no reason it's not possible for me to win."