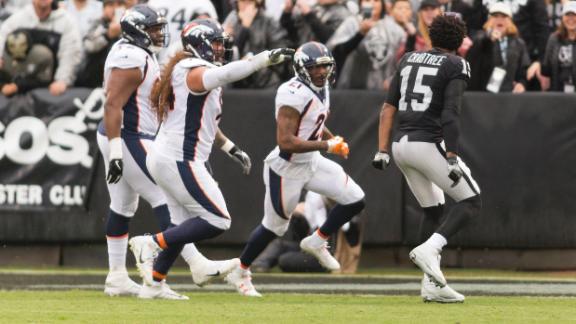 ALAMEDA, Calif. -- Denver Broncos cornerback Aqib Talib and Oakland Raiders wide receiver Michael Crabtree were ejected in the first quarter of the Raiders' 21-14 winSunday after a fight near the Broncos bench area.

Raiders guard Gabe Jacksonalso was ejected for making contact with an official.

On a second-and-6 play from the Raiders' 24-yard line during the Raiders' second possession of the game, Crabtree blocked Talib during a 5-yard run by running backMarshawn Lynch. Crabtree kept pushing Talib out of bounds after the play was over, and Talib pulled a chain from Crabtree's neck, just as he had done during a game last season.

Talib and Crabtree then exchanged shoves before throwing punches at each other. Several other players joined in as Talib eventually got ahold of Crabtree's helmet, pulling it out of a crowd, and he tossed it toward the stands.

Harris stayed down after the play and was help by the Broncos' trainers. Harris was yelling at the Raiders' bench as he left the field and motioned that he had been hit in the groin during the play.

Talib and Crabtree had moments in last season's two meetings when they were close to a confrontation, including when Talib ripped a necklace off Crabtree during the regular-season finale.

"Obviously losing one of our best players and playing a young guy [rookieBrendan Langley], that hurt us tonight,'' Joseph said. "We can't have it. We talk about this all the time and we can't have it. It's unacceptable.''