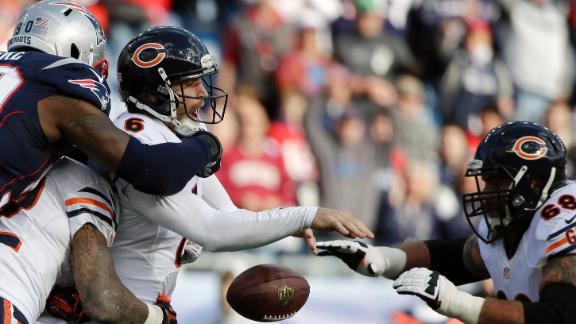 Despite Jay Cutler having a direct hand in at least four of Chicago's five losses through the first half of the season,Bearscoach Marc Trestman and general manager Phil Emery remaincommitted to their $126.7 million quarterback.

Trestman and Emery made that clear Monday in the wake of the club dropping its fourth game in five outings Sunday in a lopsided 51-23 loss to the New England Patriots.

"His leadership has been at a premium through all of this on a consistent basis throughout the season," Trestman said. "We have to help him more in terms of playing better complementary football, giving him more of a run game, and that goes to complementary football again. That means everybody working together to get that done. But I think there are a lot of positives here, and we're going to try and negate some of the negatives that we do see, that we want him to get better at."

While Cutler deserves little blame for the team's performance against the Patriots, the quarterback did commit two turnovers, one resulting in a touchdown on Rob Ninkovich's 15-yard fumble return in the second quarter, which made the score 38-7. In each of Chicago's five losses, Cutler committed multiple turnovers, resulting in a total of 44 points for opponents.

"Obviously, we're a 3-5 team, and he's a 3-5 quarterback right now," said Emery, who called the quarterback "elite" last week during a chat on the team's official website. "There's a lot of things he's got to get better at. There are a lot of things we've got to get better at. In terms of protecting the ball, in the fumbles, he had one against San Francisco [in Week 2], had one this past week and had one the previous week against Miami. Some of them are just situations, a guy coming from the blind side. But obviously, you have to keep the ball up and away. We've got to get better at that. Obviously he knows that. He holds himself accountable for it, and he'll continue to strive to get better in that area."

By the time Cutler coughed up the ball for Ninkovich's return touchdown Sunday, the Patriots already held a 31-7 advantage. The quarterback's second turnover came on a Hail Mary on the final play of the second quarter that was intended for Brandon Marshall, but was picked off by Darrelle Revis.

Cutler signed a seven-year contract in January worth $54 million guaranteed, but it's essentially a three-year deal as the entire guaranteed portion of the pact will paid over that time frame. Asked if guaranteed money on players' contracts would prevent the team from making necessary moves, Emery said, "no." But the general manager said he believes the players currently on the roster, including Cutler, "are the ones that are going to help us win."

"In terms of the guaranteed [money], that doesn't have any part in the thinking right now," Emery said. "We're focused in on helping the players we have get better at their profession, and get better as a team. Definitely, I'm not sitting around with the salary-cap spreadsheet trying to figure out if we can make something different happen as far as a new player or change any of the statuses of the current players."

That means the plan is to stick with Cutler, who now holds a 59-53 record as a starting quarterback.

"I think there are things Jay is doing very well," Trestman said. "I think he's handling himself exceptionally well on a play-by-play basis in terms of he's calmed and relaxed, and he knows exactly what he's doing. He's functioning well play by play. There are things he hasn't done, what he's got to do better. We've talked about that on a number of occasions, and there are things we can help him with."

"No, it didn't bother me. Everybody is entitled to their thoughts and opinions," Emery said. "It did hit a research project for me, so I went back and looked at their time together on the field at the same time starting the game healthy, they played 38 games together and during those games, they were 26-12. So, they definitely won together. When Jay was off the field and Brian started, they were 1-6. When Jay was on the field without Brian, they were 9-12. So the only thing that I can get from all that is they were really good for each other. They're both fine football players, lead in their own way and are both great for the organization. So, no, it didn't bother me."

Bears Stuck With Cutler?
John Clayton breaks down why the Bears have no choice but to support Jay Cutler as their starting quarterback.