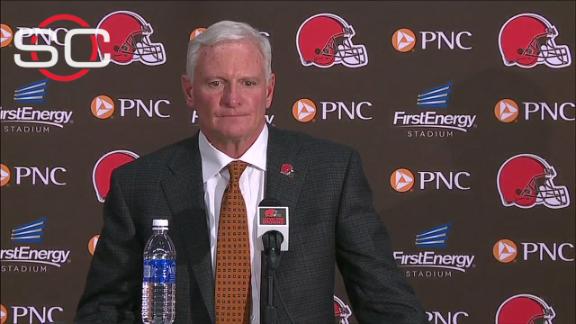 Pettine went 10-22 in two years and dropped 18 of his final 21 games after a promising 7-4 start in 2014. The Browns announced Pettine's and Farmer's dismissals shortly after the team's28-12 home loss to the rivalPittsburgh Steelers, who wiggled into the AFC playoffs.

"We greatly appreciate Ray's and Mike's dedication and hard work while with the Cleveland Browns," Browns owners Dee and Jimmy Haslam said in a letter to fans. "We've made this decision because we don't believe our football team was positioned well for the future. We are all disappointed with where we are, and we take full responsibility."

Jimmy Haslam said that the team will hire a new coach first. The coach then will be involved in choosing the general manager, whose duties will be scouting and talent acquisition.

"We want to get the right person,'' Haslam said. "I don't know if it's going to take two weeks or two months.''

Sashi Brown will go from general counsel to executive vice president of football operations. The general manager will report to Brown, the coach to Haslam. The idea is for all to work together and collaborate on decisions, but Brown will have final authority over the 53-man roster and the draft, while the coach will decide how players are used on Sundays. That structure is similar to the one in which Farmer and Pettine worked.

The search committee that will look for the coach includes owners Jimmy and Dee Haslam, Brown, and Jed Hughes of the search firm Korn/Ferry. The coach will join the search for the GM.

Haslam said this retooling of the Browns will be a "several-year rebuilding program."

"I don't think any of us anticipated going 3-13,'' said Haslam, who after firing Pettine returned from the team's headquarters in Berea, Ohio, to FirstEnergy Stadium to speak to the media. "I certainly didn't and I don't think anybody in our building did. Mike and Ray understand. They understand it's a bottom-line business and you're paid to win games, and losing 18 of 21 is not acceptable. They get that and they understand that and they're first-class guys. I hate it for them and obviously hate it for us.''

Pettine was the team's seventh full-time coach since 1999. The team has changed coaches and GMs five times since 2008.

"The blame for the franchise doing so poorly lays right here with me, because at the end of the day it's our job to put the right people in the right place and provide them with the resources,'' Haslam said. "I think we've done the latter. But the fact in the two full seasons we've owned the team we've won seven games and three games is unacceptable. We accept full responsibility for that. This has been much harder than we thought it would be, and there's a definite learning curve. I think we've found in life you often learn the hard way, and this has certainly been an example of this.''

Pettine's job security had been in doubt for months, and not even Haslam's vow at the start of training camp to not "blow things up'' could stop another regime change in Cleveland.

The ousting of Pettine, a former defensive coordinator, can be partly linked to the performance of his defense, which ranked at or near the bottom in the league in nearly every statistical category.

"It is a bottom-line business, and you guys don't have a column in the newspaper for moral victories,'' Pettine said. "Our record is that we have won three of our last 21 games. That is just not good enough.''

One of Farmer's biggest mistakes over the past two years appears to be drafting quarterback Johnny Manziel. The former college star hasn't lived up to expectations on the field and continues to be a headache off it.

Manziel spent 73 days in a rehab facility during the offseason, got benched by Pettine for two games for misbehavior and missed Sunday's game with a concussion. While his teammates finished the season, Manziel was reported to be in Las Vegas. However, a source told ESPN NFL Insider Adam Schefter that a Browns executive insisted that the team firmly believes Manziel was not in Las Vegas.

"I know the realities of this situation," Farmer said of his firing. "Life gives circumstances for a reason, a season, or a lifetime. This is not a lifetime, so I'm certain it will be OK."

Firing Pettine might cost the Browns their best player. Left tackle Joe Thomas said the result of the head-coaching decision will determine what he does and suggested he might want to leave Cleveland in light of such a change.

Thomas, who has been to nine Pro Bowls in his nine seasons, said each change gets tougher, and he now is growing more aware of his "football mortality." This was the first time Thomas strayed from saying he wanted to play in Cleveland his entire career.

"I don't know," Thomas said. "We'll have to see what happens after this."

Thomas has three years left on his contract, but he could ask for a trade.

ESPN Browns reporter Pat McManamon and The Associated Press contributed to this report.

Haslam to hire coach first
Browns owner Jim Haslam addresses his decision to hire a coach first and then the general manager.