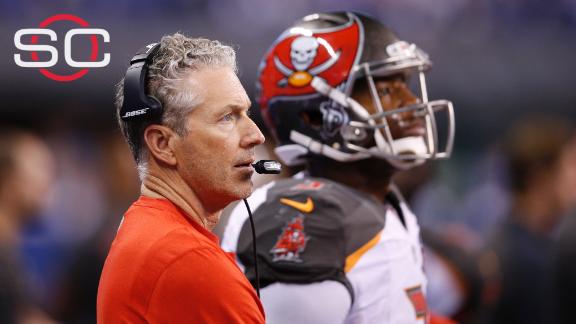 Terms of Koetter's contract were being finalized Thursday night, a source told ESPN. The team said it will have a news conference to announce the new hire Friday at 2 p.m. ET.

The decision to hire Koetter means the Bucs are staying in-house to find their replacement for the fired Lovie Smith.

Koetter was thought to be the leading candidate for the job in the days following Smith's Jan. 6 firing. He interviewed with general manager Jason Licht and ownership Tuesday.

Koetter also interviewed with the San Francisco 49ers to replace the fired Jim Tomsula. The Miami Dolphins and Philadelphia Eagles also requested permission from the Bucs to interview Koetter for their top vacancies, but the Dolphins chose Adam Gase and the Eagles chose Doug Pederson.

Koetter has been an NFL offensive coordinator since 2007, but this will be his first head-coaching job in the league. He was the coach at Boise State from 1998 to 2000 and at Arizona State from 2001 to '06, before moving on to the NFL. He joined the Tampa Bay staff in 2015 and helped guideJameis Winston to one of the best seasons by a rookie quarterback in NFL history. Winston completed 58.3 percent of his passes for 4,042 yards with 22 touchdowns and 15 interceptions, becoming just the third rookie QB to surpass 4,000 yards; the others wereCam Newton and Andrew Luck.

The Buccaneers' offense ranked fifth in rushing, thanks to Doug Martin's 1,402 yards, which ranked second in the league. They were also 17th in passing and fifth overall after being 30th in the league in 2014.

During a news conference the day after the team announced Smith's firing, Licht said the work Koetter did with Winston made him a strong candidate to fill the vacancy.

"I think any coordinator, quarterback coach in that role with a quarterback, particularly Jameis, a young quarterback, that's an important bond. That's a strong bond that they need to have," Licht said. "That was present.

"He's put a good resume in front of him this year. Historically the best offense we've had here in Tampa Bay. He's a good communicator. He's done great things with Jameis. There's a lot of good football coaches out there, and Dirk is one of them."

Koetter had similar success with QBs as an offensive coordinator with the Jacksonville Jaguars and Atlanta Falcons. Koetter spent 2010 to '12 in Atlanta, and quarterback Matt Ryan posted the top three passing yardage totals in Falcons history in those three years. Ryan set a franchise record with 4,719 yards and 32 touchdowns in Koetter's final season. Koetter was let go by the Falcons when coach Mike Smith was fired after the 2014 season.

Koetter spent five seasons in Jacksonville (2007-11) and helped then-quarterback David Garrard post one of the best seasons in team history. Garrard threw 18 touchdown passes and only three interceptions in 2007. He threw what a then-franchise-record 23 touchdown passes in 2008.

Information from ESPN's Michael DiRocco and Jeremy Fowler was used in this report.