Burns and Thornton share the secrets to beard maintenance 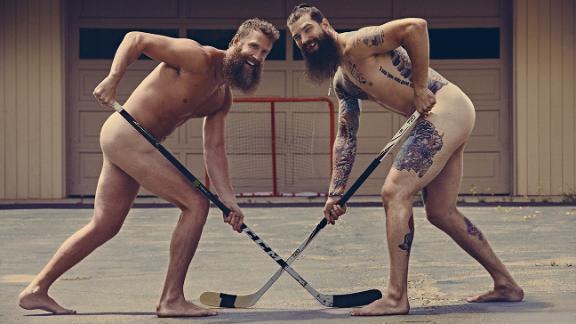 This is an online exclusive story from ESPN The Magazine's Body Issue 2017, on newsstands on July 7. Subscribe today!

The Sharks' bearded duo of Brent Burns and Joe Thornton joined elite company last season. Burns became the eighth defenseman in NHL history to tally multiple seasons with at least 25 goals, while Jumbo Joe, a 19-year veteran center, is just the 13th player to have 1,000 career assists. But their aspirations didn't stop there! Following the Sharks' season, Burns and Thornton -- now a free agent -- joined a different set of elite company by posing for the Body Issue ... together. At the shoot, the (possibly-way-too-close) teammates overshared with reporter David Fleming about being in "hockey shape," beard maintenance and their fear of needles.

What's the difference between agreeing to do the Body Issue and the moment they say, "OK, drop the robes"?

BRENT BURNS: You never know what to expect with something like this. They were like, "Boom, let's go!" We both just dropped our robes and looked up into each other's eyes and laughed: We're both naked right now doing a faceoff, so this is kind of interesting. But athletes are pretty comfortable in this state. We're naked in the dressing room all the time, and we're comfortable with each other, but usually it's with teammates, not photographers.

BB: I bet Joe has been training hard for this thing to get his body jacked. Me? I just got back from 10 days at Disney eating funnel cakes and ice cream with my kids. There was a lot of laughing during the shoot, but I think it was mostly people laughing at my body. Jumbo [Joe] is the guy who is the most comfortable naked. He's always naked. There was a pretty popular picture of us walking around Pittsburgh, and he had his shirt off. He's a nudist.

JT: I like my body. There's nothing great about it, but I'm stuck with it and I don't mind it. I never remember being self-conscious about my body. That just comes from being in a locker room for so long. I've always felt natural being naked. Never a big deal to me at all. My dad wears his underwear out to go get the mail in the morning, so that's probably where I get it.

BB: Joe's an older guy, but he's still in better shape than most of the young guys. You see kids coming into the league now with trainers and nutritionists. I never knew anything about nutrition. We ate Subway every day in junior hockey. Now kids are already gluten-free and staying away from dairy. You see a lot more yoga and core and mobility stuff.

What does it mean to be in "hockey shape"?

JT: Being in hockey shape is totally different than any other kind of fitness. You can run and bike and work out all summer and then go on the ice for one shift and you're dead.

BB: There's just so many physical things going on on the ice at the same time. Playing hockey is like juggling while riding a bike underwater while guys are trying to hit you. So you could be in good enough shape to run a marathon, but you go skate for two shifts and you feel like total dog crap. You always think, "I should have just stayed on the couch all summer eating potato chips." You come back in great gym shape and you're like, "Man, I look so good, but I can't f---ing skate at all." It's why hockey players can have bad bodies and it doesn't matter. They can skate for days. If I can bench press with two 110-pound dumbbells while training in the summer, I couldn't do that with 70 pounds come March, but I can play. For me, whatever my body does, whatever it looks like, that's how we do our jobs and it's all there for a reason, good or bad.

Glutes are a key part of a hockey body, right?

BB: It's from being in the skating position, always bent down. You always hear guys talking about it. Pants that fit are tough to find. It's why we all wear track pants. They're comfy and fit the old caboose in there a little easier. But the dentistry, the beards and the butts: Those are the defining parts of a hockey player. Scars on faces and lost teeth are badges of honor for us. I lost my first tooth when I was 16, the day after I got my braces off. It was a high stick right to the mouth. My mom was not happy. I was scared to tell her. One of the older guys on our team drove me home from practice, and the last thing I told him was, "She might just knock out the other one when I tell her."

Do hockey players even feel pain after a while?

BB: This one does! I have the pain gene. People say tattoos on the arm don't hurt. No, I got a sleeve done and that sucked. I'm a wimp. You sit there for five hours and let someone drill on you. It's like someone's using a tiny torch to burn your nerves. Joe doesn't feel pain. I don't understand how he doesn't have a pain threshold, but it's incredible.

JT: Well, I hate needles and stitches. I'm the biggest wimp when it comes to that stuff. Can't stand it. That little needle is the worst feeling for me. I hate it.

JT: He is a generational-type talent. You just don't have a guy who is 6-5, 230 pounds who is fast and strong and agile. Those guys just don't come around. He's just so relaxed and confident, and it's refreshing. We're in a stressful business, and the more you have fun with it, the more it takes away the stress.

BB: Joe's an unbelievable playmaker. Our sport is different than most sports. There's a flow to it that you can't script. You can't get to the line of scrimmage and go, "OK, you run 5 yards downfield, go right, and I'll throw you the ball and hit you right there." Every play is different. You have to create space, and nothing ever happens a second time from the exact same spot. So the better you know someone, the more you start thinking alike and knowing where you're going to go. You don't have a second to stop and think; you just have to know. Joe's better than 99.9 percent of the league at that.

JT: It's about instinct and anticipation, reading the play before it happens. You have to know where you are on the ice and where everyone is going. That's why really good players have great chemistry with their linemates.

What's the biggest problem you run into with those beards?

BB: I've got eggs from last week in this thing. We oil it. We brush it out. But you try to eat one bowl of chili or something that can fall or drip and you're just screwed if it goes in there. Nothing's getting out.

JT: I like peanut butter and jam on toast in the morning, and that's the worst. If peanut butter gets in there, forget it. You got to eat the peanut butter first and then go take a shower. It's a whole lifestyle. The other big problem is milk for me. I like to eat cereal every night, and that can be a problem. I've got a little bit of gray coming down the middle, and I tell people it's because the milk is staining the beard, not my age. What do you call my stripe, Burnsie?

BB: The racing stripe. Your face looks like a 1971 Dodge Charger.

JT: We have a guy who comes to the house and maintains it for us with a cut and a trim every three months or so. You just have to constantly look to make sure there isn't s--- in this kind of beard. Not even just food crumbs, I mean, like, random stuff. Last week I went to get the dog groomed. Simple, right? There was a tree outside the place, and the wind blew and the pollen came down. I go inside and the groomer goes, "Hey, you got something in your beard." I run my hand through it and my buddy goes, "Nope, you still have a ton of s--- in your beard." But I just feel comfortable in a beard.

BB: My dad always had a beard when I was a kid, so I bet that probably has a lot to do with it mentally. I remember him with one, and so I wanted one too.