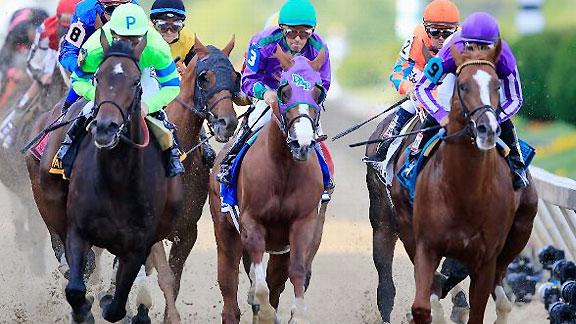 BALTIMORE -- It gets even harder from here on out for California Chrome.

He won easily in his home state of California, he dazzled in the Kentucky Derby and he dug deep to win the 139th Preakness on Saturday.

Now comes the toughest test of all, the Belmont Stakes in three weeks.

The chestnut colt with four white feet will attempt to sweep the Kentucky Derby, Preakness and Belmont, something that hasn't been done since Affirmed in 1978. Since then, 12 horses have won the first two legs and failed to complete the sweep in the 1½-mile Belmont; the last was I'll Have Another, who was scratched on the eve of the Belmont two years ago.

"You have to have a very good horse to win these three races," said Art Sherman, the winning 77-year-old trainer. "I'm hoping I've got one right now."

Maybe the horse with the modest pedigree and average Joe owners is the one.

California Chrome defeated Ride On Curlin by 1½ lengths in the Preakness, covering 1 3/16 miles in 1:54.84 on a sunny and cool day at Pimlico.

He's now won six straight races. The streak started with four in a row in California by a combined 24¼ lengths. Then California Chrome coasted home in the Derby by 1¾ lengths after opening up a big lead in the stretch. The margin dwindled in the Preakness as he fought off multiple challengers.

California Chrome's co-owner Steve Coburn shed tears after his colt crossed the finish line, dabbing them away with a blue-and-white bandanna.

"I don't mean to be bold or cocky or arrogant," Coburn said. "I saw this baby when he was a day old, I told my wife, 'Carolyn, this horse is going to do something big. I don't know what it is, but we're going to stay in the game to make sure this colt gets to be the best that he can be.'"

Quite a statement from a guy with a one-horse stable.

Coburn and partner Perry Martin bred an $8,000 mare to a $2,500 stallion to produce California Chrome. Based on the colt's humble breeding, he probably shouldn't be on the verge of making history.

His mother, named Love the Chase, won just one race.

The owners were long shots to get this far, too.

Coburn and Martin named their operation DAP Racing, which stands for Dumb Ass Partners. Their silks include an image of a donkey. Coburn and Perry, who live on each side of the California-Nevada border, get up early for their jobs -- Coburn working as a press operator and Martin running a lab that tests high-reliability equipment.

"We just hope that this horse is letting America know that the little guy can win," Coburn said.

Sent off as the overwhelming 1-2 favorite by a record crowd of 123,469, California Chrome bounced out of the gate running, with jockey Victor Espinoza moving the colt into the clear. Pablo Del Monte, a 34-1 shot, charged to the lead and was soon joined by filly Ria Antonia.

Espinoza tucked California Chrome into third, an ideal spot behind the leaders. They stayed there until making their move approaching the final turn.

"I had to move early today," Espinoza said. "I had to start moving at the half-mile pole, which is tough for a horse to start moving early and keep going all the way to the end. California Chrome proved he can move."

But there was one more challenge to come.

"It's an awesome feeling," Espinoza said. "Today it was just a crazy race. I got more tired mentally than physically. I see another horse go to the front. I was going to sit second. ... I sit back, as soon as the other horse got clear of me, it worked out perfect."

Espinoza will get another crack at trying to complete the Triple Crown, after missing with War Emblem in 2002. He finished eighth in the Belmont that year.

"You have to be a super horse to win," the jockey said. "Hopefully, California Chrome comes back good, and he's the one that hopefully can do it."

Bob Baffert trained War Emblem, one of his three Triple tries that ended in failure. He missed with Silver Charm in 1997 and again the following year with Real Quiet, who lost the Belmont by a nose.

"California Chrome is something. He's a cool customer," Baffert said after the race. "He does everything right. He's fast enough to stay out of trouble."

No Slowing Down In Quest For Triple Crown
California Chrome's co-owner and trainer discuss the win at the Preakness Stakes and the road to Belmont.

Shining Chrome
Hank Goldberg breaks down how California Chrome is able to continue beating all of the competition.