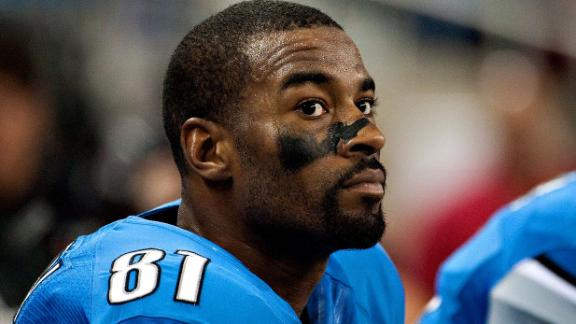 ALLEN PARK, Mich. -- Detroit Lions coach Jim Caldwell said if Calvin Johnson doesn't improve with his ankle injury, there could be a chance he misses a game.

"That possibility always exists," Caldwell said. "Just kind of depends on how one progresses during the course of the week. There are some times that they move forward enough that they won't have any significant setbacks and other times you don't feel that way. You have to wait until the end of the week and react accordingly."

Caldwell was noncommittal when asked if Johnson would be available Sunday against the Buffalo Bills, saying, "We'll see. We'll see how it goes."

He missed practice Wednesday and Thursday but returned Friday, just as he did a week ago when he ended up limited against the New York Jets last Sunday. He was targeted twice and finished with two catches for 12 yards.

Johnson said Wednesday he felt much better than he did at the same time last week.

"Things have gotten better all week," Johnson, who was limping after the game, said last Sunday. "It was a struggle at first, and as the week progressed, it got better and better."

He expected the same thing this week, but his practice regimen remained the same. Johnson has 21 receptions for 341 yards and two touchdowns this season.

Johnson is part of a banged up Lions offense. Running backJoique Bell has not practiced since sustaining a concussion against the Jets, and receiver Golden Tate showed up on Thursday's practice report with an injured hamstring.

Caldwell said he anticipated Tate playing against the Bills.

"If he can't go, obviously we'll have other guys step in and do the job," Caldwell said of Tate. "I don't anticipate that being the case, but if that does indeed happen, we have guys that have been preparing and have been working at it."