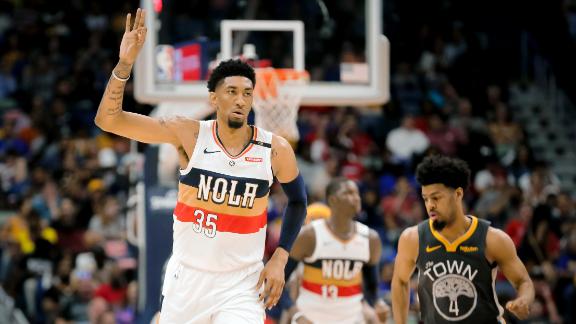 ESPN
NEW ORLEANS -- DeMarcus Cousins played a season-high 35 minutes while visiting the city he called home last season, drawing a mix of cheers and boos during a productive performance.

His former teammate, Anthony Davis, sat on the end of the Pelicans' bench in street clothes for what likely was his last game with the team that made him the face of the franchise when it drafted him seven years ago.

Cousins had 21 points and 12 rebounds, and the Golden State Warriors defeated the Pelicans 112-103 on Tuesday night in a game that also saw guard Stephen Curry leave with a mild foot sprain.

"He's going to be fine," Warriors coach Steve Kerr said of Curry. "He tweaked it, but we weren't going to mess around."

Curry, who played the first nine minutes of the game, did not speak with reporters but also did not appear particularly distressed as he sat at his locker signing basketball shoes and showed no signs of a limp as he left the arena.

Golden State, which already had clinched the top playoff seed in the Western Conference, also played without several other prominent players, including forward Kevin Durant, who was listed out with an illness, and guard Klay Thompson, who was given an opportunity to rest his sore right knee.

The likely end of the Davis era in New Orleans arrived unceremoniously. The disgruntled six-time All-Star, who missed his seventh straight game with what the team has listed as back spasms, wore a T-shirt with the famous Looney Toons sign off, "That's All Folks," written across the chest. As he walked down the tunnel toward the locker room after the game, he gave one fan a high-five.

Davis is under contract through next season, but has asked to be traded -- and is expected to be dealt this offseason by a new general manager that the Pelicans have yet to hire.

When the game ended, Pelicans coach Alvin Gentry described Davis as "a great kid" who "got some bad advice," referring to Davis' agent, Rich Paul, who also represents LeBron James and who orchestrated a public, mid-season trade demand for which Davis was fined $50,000.

"But there's nothing wrong with A.D.," Gentry added. "He's a good, solid guy with good character."

Cousins was playing in New Orleans for the first time since tearing his Achilles as a member of the Pelicans in January 2018.

As he finished dressing in the locker room after the game, Cousins smiled and acknowledged reporters who approached, but dissuaded them from asking questions by asserting he had nothing to say.

"Write what y'all want. That's what you do anyway," Cousins said. "Y'all have a wonderful evening."

Damion Lee, who has a two-way contract with Golden State and has spent much of this season in the G-League, matched his career high with 20 points. Former Pelican Quinn Cook scored 19 points.

Christian Wood had 26 points and 12 rebounds for the Pelicans, who closed out the season with 13 losses in their last 16 games as they mixed and matched lineups of primarily young or recently acquired players they sought to evaluate for the future.

Pelicans: Diallo, who came in 0 for 3 on the season from 3-point range, hit a 3 from along the right sideline late in the first half and held up three fingers as he ran back toward the defensive end. He finished with 11 points.

Lee, who turned pro in 2016 out of Louisville, said he is aware he probably won't be on the Warriors' playoff roster, but was grateful for his experience with Golden State this season.

"Picking up all this knowledge, this experience ... is something that I can cherish forever," Lee said, adding that he also appreciated the Warriors providing him a platform "to showcase myself on the NBA level."

Pelicans: Head into what promises to be the making of an eventful offseason that will include the hiring of a new general manager and a likely trade of Davis.