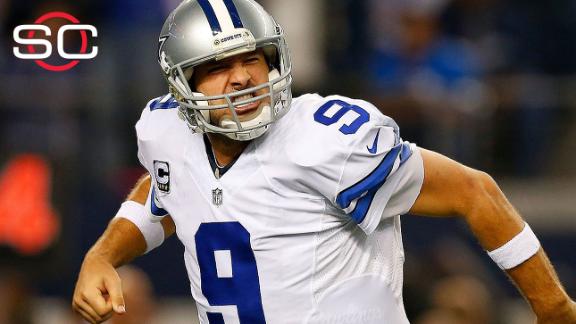 IRVING, Texas -- In the past Tony Romo has said almost casually the Dallas Cowboys will win a Super Bowl with him as the quarterback.

After receiving the Nancy Lieberman Lifetime Achievement Award at the Dream Ball Gala in Dallas recently, Romo made another passing reference to bringing the Cowboys their first Super Bowl since 1995.

This time he put a time stamp on it at the close of a 10-minute speech about the value of needing others to help you achieve a goal. Romo reiterated his desire to win a championship not just for himself but for Jason Witten, Jason Garrett and the Jones family.

"I literally want to win it so bad for them, for the people around me who have helped me," Romo said. "They've allowed me to achieve my dreams and my goals. Without them, I'm not there, I promise you. I'm not where I'm at right now and I'm not going where I'm going."

It was hardly Joe Namath-worthy or even akin to Jimmy Johnson's "put it in three-inch headlines" guarantee before the 1993 NFC Championship Game against the San Francisco 49ers.