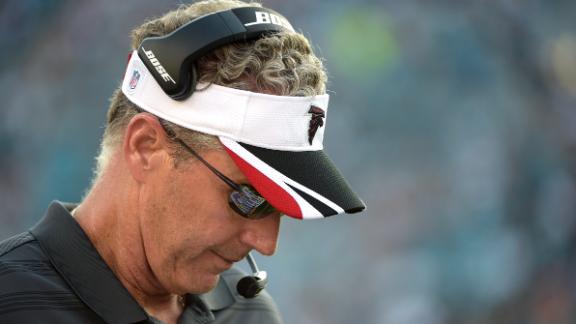 Dirk Koetter has agreed to terms with the Tampa Bay Buccaneers to be their offensive coordinator.

Koetter had spent the previous three seasons with the Atlanta Falcons. Prior to that, Koetter was the offensive coordinator in Jacksonville for five seasons. He also has been a college head coach at Boise State and Arizona State.

"I'm very excited to welcome Dirk to our staff," Bucs coach Lovie Smith said in a statement. "With over three decades of experience at both the college and the NFL level, Dirk has a proven track record as a top offensive coordinator. During his time in Atlanta, he led one of the most productive offenses in the league and I believe he will enjoy similar success here with the exciting young players we have on offense. It became very apparent early in our conversations that we share some of the same philosophies regarding the offensive side of the ball and I look forward to working with Dirk as we begin preparing for the 2015 season."

The Bucs were without an offensive coordinator in 2014. Jeff Tedford was hired for that job, but he had heart surgery just before the season started. Tedford originally was supposed to take a short leave of absence, but it turned out to be permanent. The Bucs let Tedford out of his contract in December, and he now is coaching in the Canadian Football League.

In Tedford's absence, quarterbacks coach Marcus Arroyo called the plays with input from the offensive staff.

Koetter, 55, inherits an offense that ranked 30th in the league this past season. He also could be getting a new quarterback. The Bucs have the first overall pick in the draft and may use it on Oregon's Marcus Mariota or Florida State's Jameis Winston.