Draymond Green cleared after knee injury, to play vs. Pelicans 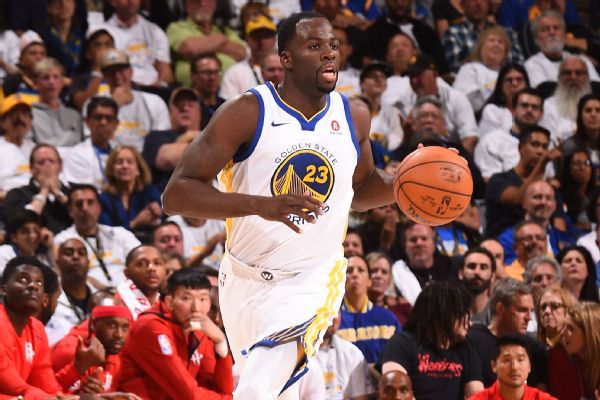 NEW ORLEANS -- The Golden State Warriors will have All-Star power forward Draymond Green in the lineup against the New Orleans Pelicans on Friday night.

Green, who suffered a left knee strain in Tuesday's season-opening loss to the Houston Rockets, said after Friday morning's shootaround that he was cleared to play against the Pelicans (ESPN, 9:30 pm. ET).

"I was hoping it wasn't more [severe]," Green said. "I knew when I came down, I didn't feel a pop, but it was hurting really bad. I was actually hoping for a just a bruise, but it wasn't that, so I thank God."

Green injured his knee in the third quarter when he was fouled during a running jumper and landed awkwardly. He immediately began hobbling and rubbing his left knee. He retreated to the locker room, where he was diagnosed with a left knee strain and did not return to the game.

ESPN reported Thursday that his MRI results came back negative.

"It was a big relief. ... I was concerned," Green said. "I honestly thought it was my meniscus."

The reigning NBA Defensive Player of the Year was asked if he's surprised that he'll be back in the lineup so soon.

Warriors forwardAndre Iguodala will make his season debut Friday after missing the opener due to a back strain. Omri Casspi is sitting this one out with a left ankle sprain.