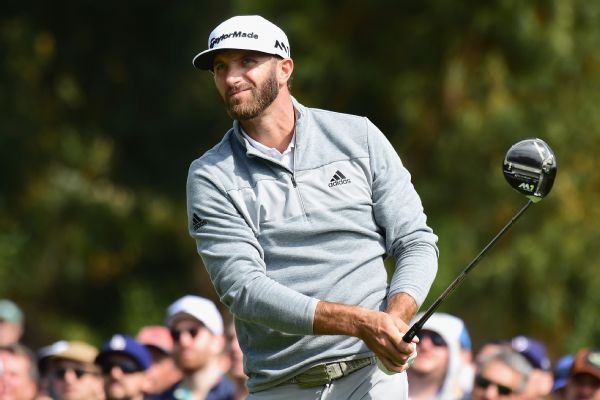 LOS ANGELES -- Dustin Johnson went to No. 1 in the world with a world-class performance at Riviera.

Johnson turned a marathon finish into a Sunday stroll in the Genesis Open. He finished the third round in the morning with a 7-under 64 to build a five-shot lead, stretched it to nine shots at one point in the final round, and coasted home to a 71 and a five-shot victory.

"It sounds good," Johnson said when asked about being the top player in the world. "I played really great all day. I couldn't have driven it any better. That was a big key."

Johnson became the 20th player to reach No. 1 since the world ranking began in 1986, ending Jason Day's 47-week stay at the top.

"He deserves it because he's been playing great golf," Day said.

Johnson won for the fourth time against some of golf's strongest fields dating to his U.S. Open victory last summer. All he cared about Sunday was winning at Riviera, one of his favorite courses where he has had chances in four of the last five years.

There was no doubt this time.

Johnson had a one-shot lead when he arrived Sunday at Riviera, which lost 10 hours the previous three days to fog and torrential rain. Johnson had such command of his game that his longest par putt in the third round was from 4 feet, and he closed with three straight birdies to make the final round in the afternoon more of a coronation.

Johnson went 49 straight holes without a bogey, a streak that ended on No. 9 in the final round, and he was sloppy down the stretch when it no longer mattered.

It capped off a strong stretch that elevated Johnson to the top. Not only was it his fourth victory since June, but he has finished among the top three in eight of his last 16 tournaments.

"No surprise to us players, and I don't think too much surprise to many others," Jordan Spieth said. Spieth ended his streak of 19 consecutive rounds under par on the PGA Tour -- and 27 rounds worldwide -- with a 72 in the third round.

Johnson finished at 17-under 267. About the only disappointment was losing a chance to break the oldest 72-hole scoring record on the PGA Tour schedule. Lanny Wadkins won at Riviera in 1985 at 20-under 264.

Johnson reached 20 under with his 21st birdie of the week on the par-3 sixth hole. Having made only one bogey all week, he finished with three over the last 10 holes.

"I didn't finish the last 10 holes the way I'd like to, but I had a pretty good lead. I was on cruise control," Johnson said.

He still had no complaints. He scooped up his 2-year-old son, Tatum, on the 18th green. Johnson's fiancee, Paulina Gretzky, announced on Instagram earlier this week they are expecting their second child.

Thomas Pieters of Belgium and Scott Brown tied for second place. No one else really had a chance to win as soon as Johnson began the final round with two straight birdies, but Pieters closed with a 63 and Brown shot a 68 to share second at 12-under 272.

It was a big step for Pieters, who has earned a PGA Tour card, and it assured him a spot in the next two World Golf Championships. Cameron Tringale, who played the final 36 holes with Johnson, also was at 12 under until a double-bogey on the final hole dropped him to a tie for eighth.

Bryan went to the same high school as Johnson -- Dutch Fork in South Carolina -- but played most of his golf with Johnson's younger brother, Austin. Bryan has seen enough of Johnson to realize this was inevitable.

Johnson is too powerful, and now has great control of his wedges and is more consistent with his putting. It's a combination that took him to No. 1 in the world.

"Honestly, I'm surprised it took so long for him to get to No. 1 in the world," Bryan said. "He's got all the talent that you could ever want in a golfer."

Pat Perez saw it all day. He also was in the final group for the last 36 holes, and on the ninth tee, Perez stood to the side as Johnson's tee shot was headed for a bunker. Johnson dipped his knees and urged it to cut, as if that mattered -- it cleared the sand by some 20 yards.

Perez shook his head and smiled. Later in the final round, Perez was standing behind the 10th green when he said, "The guys hits it 40 yards by me, hits his short irons great and makes 30-foot putts."

Johnson claims world No. 1 rank with win
Dustin Johnson cruises to a win at the Genesis Open that also clinches the world No. 1 ranking for the first time in his career.