Eric Reid says owners haven't signed him because of protests 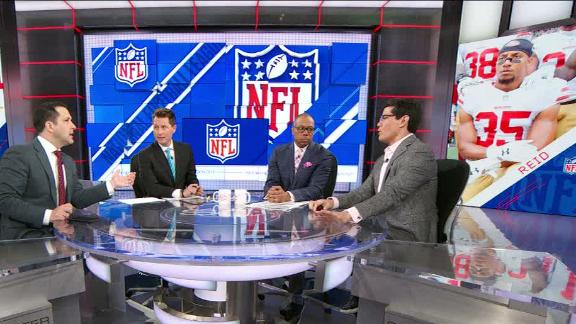 SANTA CLARA, Calif. -- Two days into free agency, many players have signed with new teams or re-signed with their current ones. Safety Eric Reid isn't one of them.

Reid, who was the first player to kneel alongside Colin Kaepernick during the national anthem in protest of racial inequality and systemic oppression, took to Twitter on Thursday afternoon to state his feelings on how his protests might be affecting his job search.

Reid went on to express his belief that the league's general managers aren't the ones keeping him from signing a new deal. Rather, the root of the problem is at the ownership level, he said.

After spending the past five seasons with the San Francisco 49ers, Reid became an unrestricted free agent when the new league year began Wednesday. Even as other free agents have found new deals and some continue to take visits, Reid has not been publicly linked to any potential landing spots.

That probably doesn't come as a surprise to Reid, who in December acknowledged that his protests could be held against him in free agency.

"I would say I understand that's a possibility," Reid said then. "And I'm completely fine with it. The things that I've done, I stand by, and I've done that for my own personal beliefs. Like I said, I'm fine with whatever outcome happens because of that."

In 2016, Reid joined Kaepernick in his protest, first kneeling alongside him before a preseason game in San Diego after meeting with Nate Boyer, the former Green Beret and NFL long-snapper, to discuss potential protests that might be more respectful than sitting down during the national anthem.

From there, Reid knelt alongside Kaepernick and linebacker Eli Harold for the entire season. Before the 2017 season, Reid decided he would go back to standing during the anthem, but racially charged unrest in Charlottesville, Virginia, in August made him reconsider.

As part of his efforts to create change, Reid initially joined the NFL Players Coalition formed by Eagles safety Malcolm Jenkins. Reid participated in a group chat with fellow members and attended meetings with league representatives and owners as part of the coalition.

Reid announced in November that he was leaving that group, citing what he said was Jenkins' decision not to include Kaepernick in the group as well as his own feeling that Jenkins had "misled" him on the coalition's objectives.

Reid told ESPN that Jenkins had conversations with the NFL without him or Dolphins safety Michael Thomas being involved. Reid also said Jenkins told the NFL the players would end demonstrations if money was donated by the league to certain initiatives.

"That was never discussed at any point. I feel like I've been misled," Reid said. "I won't accuse Malcolm of directly lying to me, because I don't think he's that type of guy. But I will say he's misled us. And shoot, if that's what lying is, then that's what it is."

Jenkins denied Reid's claims in a statement to ESPN at the time.

"They understood the entire scope of the plan," he said. "The last time we had conversations with [commissioner Roger] Goodell and [vice president of football operations] Troy Vincent, Michael Thomas and Eric Reid were on that call. They understood the proposal. What we didn't have was a conversation with players in the coalition based on some of the responses that we got from the league. We then talked about myself contacting Troy Vincent just to give them some updates on some of our feedback, which I did. That call did not have Mike or Eric on it. Everybody kind of agreed to that."

Reid officially announced his withdrawal from the coalition after receiving a text from Jenkins on Nov. 29 asking him whether he would be comfortable ending the demonstrations if the NFL made a donation to the coalition.

Later that day, the coalition and the NFL agreed in principle for the league to contribute $89 million over seven years to projects centered on criminal justice reform, law enforcement and community relations and education.

On the field, Reid is coming off a season in which he started 12 games, finishing with 66 tackles with a fumble recovery and two interceptions. He spent most of that time at strong safety, but Reid also briefly moved to linebacker after NaVorro Bowman's release and injuries left the Niners short at the position.

Reid, 26, moved back to strong safety following a season-ending arm injury to Jaquiski Tartt in a Week 9 loss to Arizona. Reid said in December that he could fit in any defense but did like the opportunity to play the box safety role in coordinator Robert Saleh's scheme.

Although the Niners seem content to move on with Tartt, Adrian Colbert and Jimmie Ward as their primary safeties, coach Kyle Shanahan praised Reid at the end of the season.

"He started out with real high expectations this year going into a contract year, playing in a new scheme that he had a hell of a camp doing," Shanahan said in January. "Got hurt early in the year, which was frustrating for him, took him some time to get back. When he did, we had some injuries and some other people playing so we tried him at linebacker for a few weeks. Put a huge challenge on him to do that, but he stepped up for it. Once we lost Tartt and stuff, we had to shuffle him back to safety and he's gotten better each week. It was a new scheme for him, he's been moving around all year and this last month or so, I feel like he's been playing his best football."

For now, Reid's next destination remains unknown. But he made it clear Friday he intended to make sure he had his say in how the story was told.