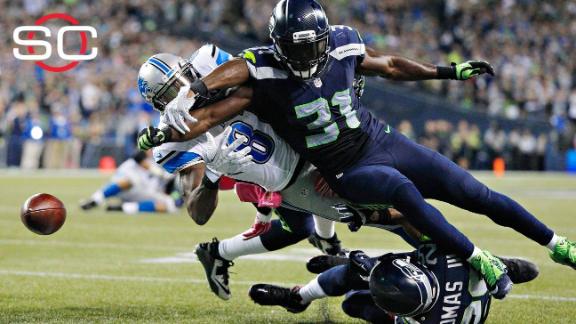 Lance Easley was sitting in a Southern California acting class Monday night when his phone started blowing up. Easley ignored the texts and calls, assuming they were jokes from friends reminding him that the Seattle Seahawks were once again on Monday Night Football.

Easley soon learned the reason: Another officiating controversy had erupted within feet of the final play of his own brief NFL career. And Easley immediately recognized the official at the center of the call: Back judge Gregory Wilson.

Easley, who as a replacement official in 2012 made the initial ruling in the infamous "Fail Mary"game, was once trained by Wilson in the Southern California Collegiate Football Officials Association. In an interview Tuesday morning, Easley said he plans to reach out to Wilson to offer support.

"He was a mentor of mine," Easley said by phone from his home near Los Angeles. "I would email him plays and ask him if I was making the right calls. I've still got his email and was planning to let him know that I totally understand what he's going through."

Wilson's call has already been repudiated by the NFL. According to vice president of officiating Dean Blandino, Wilson should have called an illegal bat penalty on Seahawks linebacker K.J. Wright, which would have given the ball to the Detroit Lions on the Seahawks' 1-yard line. Instead, the Seahawks regained possession and ran out the clock in a 13-10 victory.

Seahawks coach Pete Carroll said Tuesday in a radio interview that he was unaware of the rule and would have done the same thing Wright did.

"That was a smart play," Carroll said during his weekly radio appearance on 710 ESPN Seattle. "He wasn't aware of the rule. I would have done the exact same thing. I didn't know that rule either. I've never even seen it come up, and I've been coaching for I don't even know how many years it is and how many games it could possibly be. I don't know if anyone would have known that. If somebody did, they did."

In that 2012 game, Easley ruled that receiver Golden Tate caught a game-winning touchdown pass via simultaneous possession to give the Seahawks a 14-12 victory over the Green Bay Packers. He still insists that the call was correct but has been the subject of criticism and even death threats in the three years since.

He was diagnosed with post-traumatic stress disorder (PTSD) and told Yahoo! Sports in January that he had considered suicide. But Easley said Tuesday that he is "so much better now" after months of treatment and therapy. He is currently working on a movie adaptation of his book, "Making the Call," and is developing a reality television show about football officiating in hopes it can humanize the job.