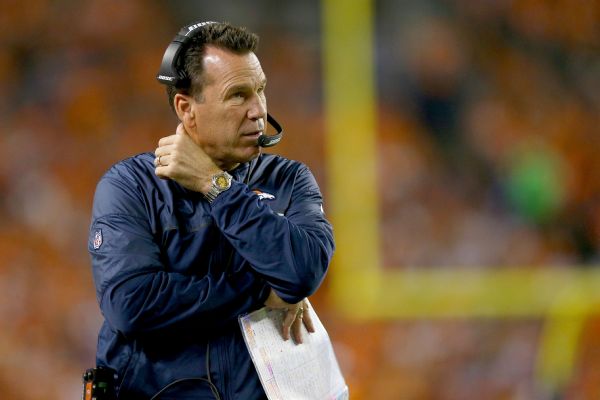 ENGLEWOOD, Colo. --Denver Broncos coach Gary Kubiak was released from a Denver-area hospital Monday afternoon and will not coach the team's Thursday night game in San Diego after being diagnosed with a "complex migraine condition.''

Kubiak was taken to the hospital by ambulance Sunday night following the Broncos' 23-16 loss to the Atlanta Falcons. Broncos executive vice president of football operations/general manager John Elway said Kubiak will take the next week off and special-teams coordinator Joe DeCamillis will be the Broncos' interim coach this week.

Later Monday, Kubiak said in a statement that he was feeling better and thanked supporters for the well-wishes he had received.

"It's tough not being there with our team this week, but I've got great confidence in Joe D, our coordinators and coaching staff, and all of our players," he said. "Greek [medical trainer Steve Antonopulos] and the medical team did an outstanding job taking care of me and getting this figured out. I've made a lot of positive changes health-wise in recent years and will continue to listen to doctors.

"I'll be at home this week, resting and getting healthy, and I look forward to rejoining our team on Monday."

As to whether Kubiak will have any contact with the coaching staff or players this week, Elway said, "We're really kind of leaving that up to the doctors ... the process for Gary is to worry about Gary this week.''

Kubiak coached through the end of the game even though he had felt ill before and during Sunday's game, according to team officials. Kubiak did his customary news conference following the game and walked back into the locker room.

Kubiak continued to feel ill, however, and was taken by ambulance to the hospital.

"I was more concerned as a friend,'' Elway said. "I talked to him before the game and he wasn't feeling well and so ... he kind of got very lethargic and tired [after the game].''

Elway said he went to the hospital Sunday night to be with Kubiak and Kubiak's family. It is the second time in the past four seasons Kubiak has left a stadium in an ambulance.

In 2013, Kubiak suffered what was described as a mini-stroke at halftime of a game against the Colts. He spent two nights in the hospital after that incident.

"Obviously any time when you have an episode like Gary had in '13, what happened last night is a big concern,'' Elway said. "But when we left the hospital, and his family was very relieved with what they heard and what went on.''

Elway said Kubiak will be evaluated by doctors this week and undergo additional tests to see if the "triggers'' for the migraines can be revealed.

And when asked if Kubiak had expressed any desire to work this week, including being on the sideline for Thursday night's game, Elway said: "We didn't give him a chance. That question was not asked ... Gary is going to concentrate on Gary this week.''

DeCamillis said he expected the team's staff to make preparations for the game "seamless."

"It was obviously a shock for all of us, and we're just happy he got the prognosis that he did,'' DeCamillis said.

DeCamillis said his message to the team was "quick turnaround ... we've got to strap up our boots and get ready to roll.''