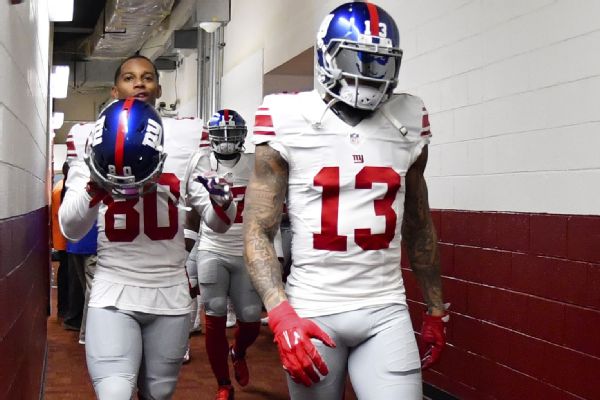 EAST RUTHERFORD, N.J. -- New York Giants wide receivers Odell Beckham Jr.and Victor Cruz want to concentrate on their upcoming playoff game against the Green Bay Packers, not their recent off-day trip to Miami that had them taking pictures shirtless on a yacht with celebrities.

The Giants play the Packers in a wild-card game Sunday at Lambeau Field. They already lost in Green Bay, 23-16, in Week 5 this season.

Behind the scenes, Giants players who were on the Miami trip -- Beckham, Cruz and rookies Sterling Shepard and Roger Lewis -- have brushed off the drama, according to sources. They find all the attention it has received humorous, believing it's their personal lives and "much ado about nothing."

Coach Ben McAdoo hasn't mentioned anything about the trip to the team, according to another source.

"The players were off. I'm not going to talk about players and their off time," McAdoo said. "They showed up [Tuesday] ready to work. Had a good day of practice [Wednesday]."

The concentration has been on football.

"I'm really more focused on the Packers and the Giants, so any of those questions -- whenever you all want to sit down and have a little side-to-side, we could do that after the playoffs," Beckham said Wednesday.

Beckham, 24, said the excitement of reaching the postseason and playing at Lambeau Field in a do-or-die game has him "trying to hold it all together." He admitted to tossing and turning at night on Tuesday.

Cruz, 30, is a bit more experienced. He won a Super Bowl with the Giants five years ago.

"I'm just here to talk about the Green Bay Packers and the matchup that we got coming up this week on Sunday afternoon," Cruz said Wednesday. "That's the only thing I'm worried about."

Beckham was on the practice field Wednesday, dancing and smiling as usual. Cruz and Shepard were by his side.

"We're focused on the Packers and the Giants," Beckham said. "Anything else doesn't really bother me."