Is Trae Young just the first of many Steph Curry clones? 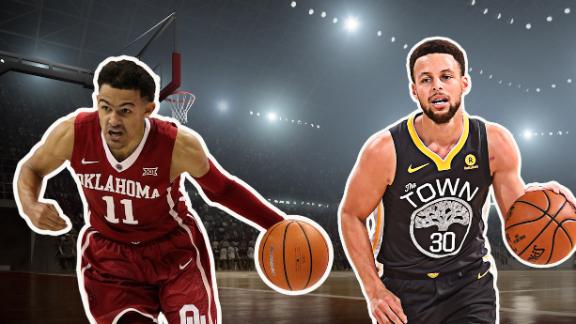 It comes as little surprise to anyone who has watched Trae Young that Oklahoma's phenomenal freshman point guard modeled his game in part after two-time NBA MVP Stephen Curry.

"I would record every game," Young recently told The Wall Street Journal. "I'd watch before I went to bed or the next day. I watched how he played, how the Warriors moved without the ball and how Steph got everyone involved and still created for himself. I loved watching Steph's game."

Young was 10 when Curry was drafted by the Golden State Warriors in 2009 and was wrapping up his sophomore year in high school when Curry won his first of two MVPs and led the Warriors to the first of two championships -- so far -- in 2015. And now, having developed shooting range and ballhandling skills beyond where Curry was at the same age, Young is a contender for NCAA Player of the Year awards and a likely high lottery pick if he declares for the NBA draft.

The success Young has enjoyed, and the example Curry has provided, raises a question: Are there more Curry clones coming in future years?

How Curry has changed thinking in the NBA

One of the most fascinating articles about the NBA in recent memory came from my former colleague Tom Haberstroh, who suggested in an ESPN Insider article on the eve of the 2013-14 season that Curry should attempt 10 3-pointers a game.

At that time, the notion of Curry or any player shooting so many 3s seemed fanciful. While he had set a new league record by making 272 3-pointers the previous season, Curry had attempted just 7.7 per game. No player in NBA history had attempted more than the 8.7 Baron Davis attempted in the 2003-04 campaign, when he made them at a below-average 32.1 percent clip.

Moreover, the trend in recent seasons had actually been toward the league leader attempting fewer 3-pointers per game. In 2010-11, Curry's teammate Dorell Wright had topped all NBA players by averaging 6.3 attempts per game -- a rate that would rank outside the league's top 25 today.

As it turned out, Haberstroh was a little ahead of his time. Curry's 3-point attempts increased only marginally to 7.9 per game in 2013-14, albeit in fewer minutes. It wasn't until two seasons later, after winning MVP, that Curry fully unleashed his full 3-point arsenal. In 2015-16, Curry zoomed past double-digit 3-point attempts, averaging an incredible 11.2 per game ... and becoming the first player in NBA history to be voted MVP unanimously.

Curry's success helped pave the way for other stars to shoot 3s more frequently. This season, his 10.0 3-point attempts per game rank second in the league behind MVP favorite James Harden of the Houston Rockets, who is attempting 10.7 per game. Each of the past two seasons, both Harden and teammate Eric Gordon have attempted more 3s per game than any player in league history before Curry.

Certainly, some of this can be traced to the league-wide growth in 3-point attempts, which long predates Curry, as well as factors unique to each situation. The marriage of Mike D'Antoni's 3-happy offense with Harden's and Gordon's skills has been crucial. Still, given the dramatic nature of the increase practically overnight, it's hard not to credit Curry's influence.

Because of the shorter 3-point line and larger gaps between teams, the NCAA hasn't needed to follow the NBA's lead when it comes to embracing the 3. After all, while Young's 10.5 3-point attempts per game would put him third in NBA history behind Curry and Harden, they rank a blasé 43rd among Division I players since 1992-93,according to Basketball-Reference.com.

However, one specific area of Curry's game that has been responsible for the growth of 3-point attempts in the NBA does seem to have trickled down to the college level: players shooting 3s off the dribble. I investigated the rising importance of the pull-up 3 during last year's playoffs, and college players and coaches seem to have taken notice, too.

The website Hoop-Math.com has used play-by-play data to track assisted and unassisted field goals at the college level back through 2011-12. The leaderboard of unassisted 3s is dominated by the past two seasons, and Young has an excellent chance to post the highest total in that span.

Consider Young an outlier among this group. He's the only player to have this kind of success on pull-up 3s in a major conference, one of two players taller than 6 feet on the list (Andre Spight, a transfer from Arizona State, is the other) and the only freshman. (Clemons, a sophomore last season when he ranked second in the NCAA, is the other underclassman.)

All of that explains why Young is a likely lottery pick and none of the other pull-up 3 specialists were no more than fringe NBA prospects at best.

More Traes (and treys) on the way?

During the ABC broadcast of Warriors-Cleveland Cavaliers on Christmas Day 2015, ESPN's Mark Jackson famously worried whether Curry's success might have a negative impact on young players.

"Understand what I'm saying when I say this," Jackson said. "To a degree, he's hurt the game. And what I mean by that is I go into these high school gyms, I watch these kids, and the first thing they do is run to the 3-point line. You are not Steph Curry. Work on the other aspects of your game. People think that he's just a knock-down shooter. That's not why he's the MVP. He's a complete basketball player."

While Jackson's fear that young players could take the wrong lessons from Curry was reasonable, Young seems to have drawn all the right conclusions. Now the question is what other players might follow the same template.

As Jackson further noted, every great player has been emulated by the next generation, which led to decades of searching for "the next Michael Jordan." The difference with Curry is that his success is much less dependent on extraordinary size or athleticism. Put another way, there are only so many 6-foot-6, high-flying wings or 7-footers in the world. The pool of 6-foot-3 players with the potential to follow in Curry's footsteps is much larger.

It would be a mistake to trivialize the hand-eye coordination, balance and work ethic necessary to match Curry's shooting skill. Young has pretty good genes in his own right. Though not as accomplished as Dell Curry, himself one of the greatest 3-point shooters in NBA history, Rayford Young averaged 17.8 points per game as a senior at Texas Tech before playing overseas and was a 38 percent career shooter from the college 3.

Given those challenges, I doubt there's any danger of Curry clones overrunning the NBA anytime soon. However, I suspect Young isn't the last of his kind. After all, a world in which it's perfectly normal for an NBA player to shoot 10 3-pointers a game will soon be all young prospects have ever known.

Young continues to show glimpses of an NBA MVP
Trae Young is an explosive young scorer, and reminds some of a certain guard on the Golden State Warriors. 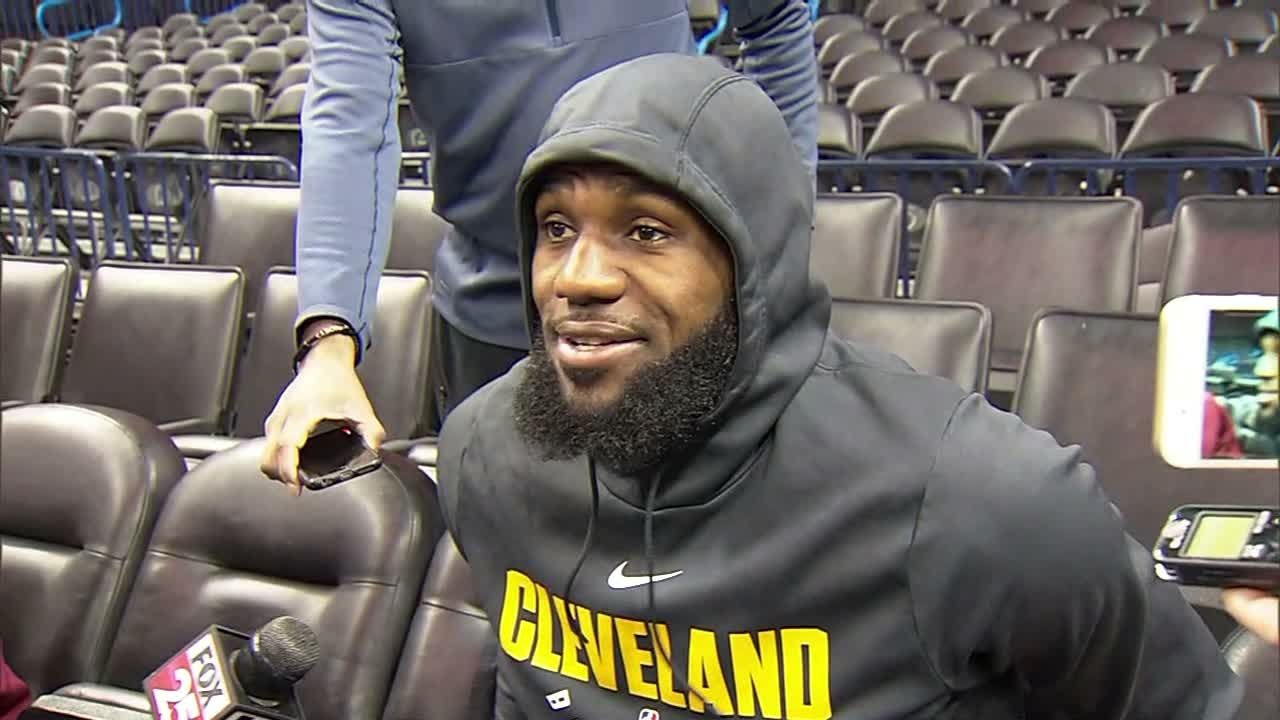 LeBron on Trae Young: 'He better go pro'
LeBron James playfully comments on the biggest adjustment Trae Young will have to make going from collegiate to professional basketball. 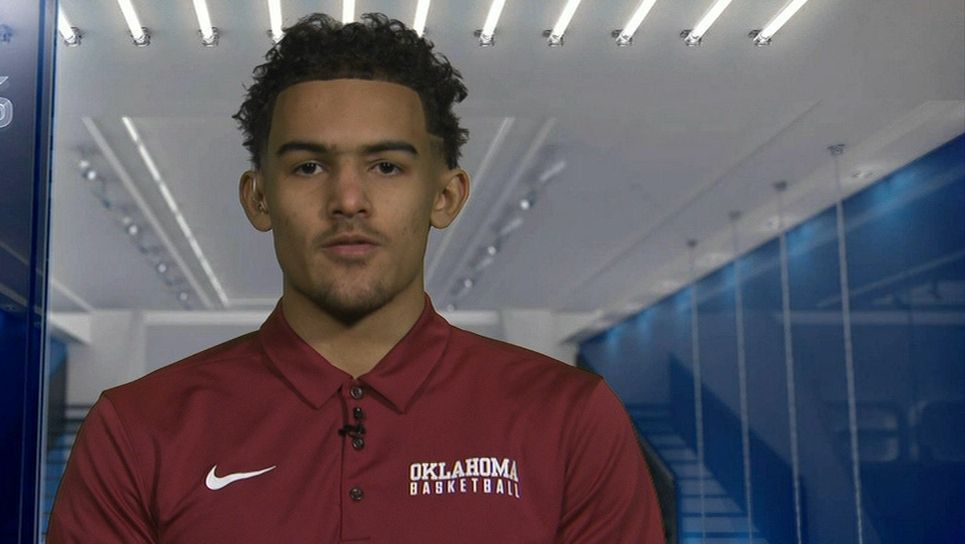