Jimmy Garoppolo to start for 49ers on Sunday over C.J. Beathard 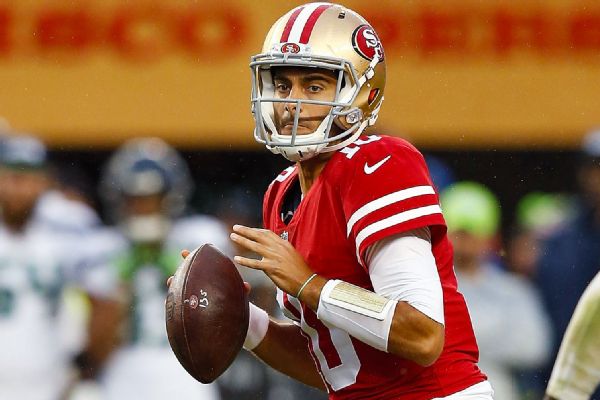 SANTA CLARA, Calif. -- The wait for Jimmy Garoppolo to make his first start as a member of the San Francisco 49ers will end Sunday in Chicago.

The Niners announced Tuesday afternoon that coach Kyle Shanahan met with his quarterbacks and told them that the plan for Sunday's game is to go with Garoppolo against the Bears.

The announcement comes almost a month after the Niners traded their second-round pick to the New England Patriots for Garoppolo on Halloween and a day after Shanahan indicated he would have a decision made by Wednesday so the starter would be able to get most of the practice repetitions this week.

"To give those guys the best chance to be successful, you want to give them all the reps, which still isn't enough reps," Shanahan said Monday. "Any time you split those evenly, it's kind of a disservice to both. If you need those reps to make a decision, I've done that before in other situations when you have to do it, but that's usually a situation you want to try to avoid."

The decision to go with Garoppolo over C.J. Beathard was made easier by Beathard's health status. He suffered a left knee bruise and a hip strain in last week's loss to the Seattle Seahawks and was "pretty banged up" on Monday, Shanahan said.

With the possibility that Beathard might not be able to practice early in the week, the move to Garoppolo seemed to be a logical one, since he figured to be in better shape to handle the snaps in Wednesday's practice.

Shanahan said Monday he wanted to give Beathard more time to heal, watch some Chicago game tape, and then talk to Beathard and Garoppolo before rendering a decision.

The question of when Garoppolo would start has loomed over the Niners since the day he was acquired. It seemed he would do so last week against Seattle as San Francisco came off the bye, but Beathard played his best game in a win against the New York Giants the week before, leading to a one-week delay.

Garoppolo also has been trying to play catch-up as he has worked to learn an entirely new offense after spending three and a half years in the Patriots' scheme.

Despite the competition for the starting job, Shanahan said the quarterbacks have been supportive of each other.

"He's learned a lot from watching C.J. and talking," Shanahan said. "He asks a lot of questions. Those guys are great in there. We don't hold anything back. Stuff C.J. is seeing, it's not like he waits until we're alone to talk about it. He'll say it right there and Jimmy will ask a question and vice versa. They definitely help each other. We've got a very competitive room, but we've also got a lot of confident people that when we're in there we're working our hardest to get better."

Garoppolo got his first game action as a Niner after replacing the injured Beathard with 1:07 left in last week's loss. He promptly ran for 4 yards and completed both of his pass attempts for 19 yards, including a 10-yard touchdown pass as time expired.

This week, Garoppolo will get the chance to implement a full game plan tailored to him and attempt to work past the point where he has to lean on a wristband with play calls on it to communicate in the huddle. Garoppolo used the wristband last week but was hopeful after Sunday's game that he won't need it moving forward.

"We'll see how this week goes," Garoppolo said. "That's kind of what it is right now but we'll try to progress and make it as smooth as possible."

This will be Garoppolo's third career start after making two with New England last year. He went 42-of-59 for 496 yards and four touchdowns for a passer rating of 119.0 and a QBR of 88.7 in those two starts.

Coincidentally, Garoppolo's first start will come in Chicago, not far from his hometown of Arlington Heights, Illinois.

Garoppolo said recently he has never had a chance to play a professional game in Chicago.

"It's going to be cool," Garoppolo said. "I've never gotten to go back there and play. When I was in New England, a couple times the Bears came out to us. That'd be cool getting back to the hometown and everything."